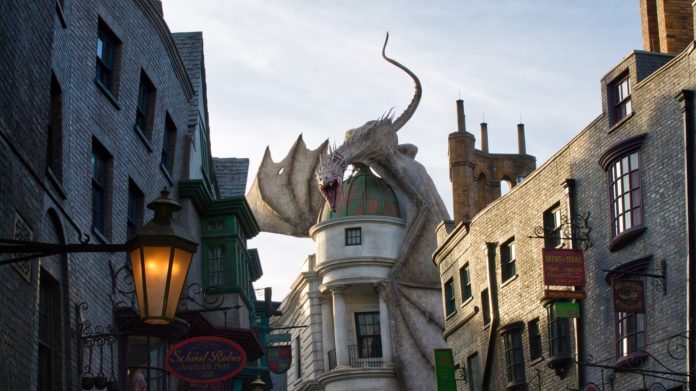 Harry Potter movies were the start of the greatest fantasy revolution in human era. It was a treat to watch for both young ones and the adults. What made the movie version amazing? The visual effects.

Part of the magic of the Harry Potter movies is the special effects; spells, flying on broomsticks, a flying car, disappearing in a fireplace, it all happens when Harry Potter is around, but how do the film makers create these special effects? Actually there are several visual effects companies which collaborate, depending on their specific area of expertise. This is how just some of the effects are created.

A blue screen is used as the “sky” background and the flyer is seated on a broomstick on a hydraulic rig. The rig is computer controlled to create the swooping and sweeping of a game of Quidditch and the resultant film is then transferred into the computer graphics environment to be edited into the finished film.

2. Dumbledore’s memories being stored in the Pensieve:

The memories are seen dropping into a liquid in the Pensieve (bowl) and this was created by taking painted pictures (the memories) and amalgamating them into specially created software which produced the look of the liquid and the pictures floating down into it.

3. The sphere of water produced by Dumbledore’s spell to trap Voldemort:

The broomstick rig came into its own again which together with Plexiglass spheres with water squired over the top and inside created the effect of Voldement floating and spinning in a sphere of water.

4. The ice covering the frozen lake from which Harry gets back the sword of Gryffindor:

When the camera is filming from above the lake, the ice is created by thick sheets of Plexiglass covered in a frosty texturing. When filming beneath the “ice”, wax is used floating on the water. Apparently this is a well known technique in the movies.

5. The Gringotts dragon: The rather emaciated Gringotts dragon was actually modelled on some photographs provided by the RCPCA of mistreated dogs. The idea was to capture a “hangdog” look such that viewers would feel sorry for it rather than repulsed but it still had to be frightening. Once the concept was agreed, the dragon was sculpted and painted using a 3D computer program. A skeleton of the dragon was built and muscle geometry created which animated the skin to simulate movement.

For filming the kids sitting on the dragon, a full scale section of its back was sculpted and covered with a silicon hide. For movement a motion control base and a rig allowed for movement of the different aspects of the dragon including parts of its spine, loose skin under its neck.