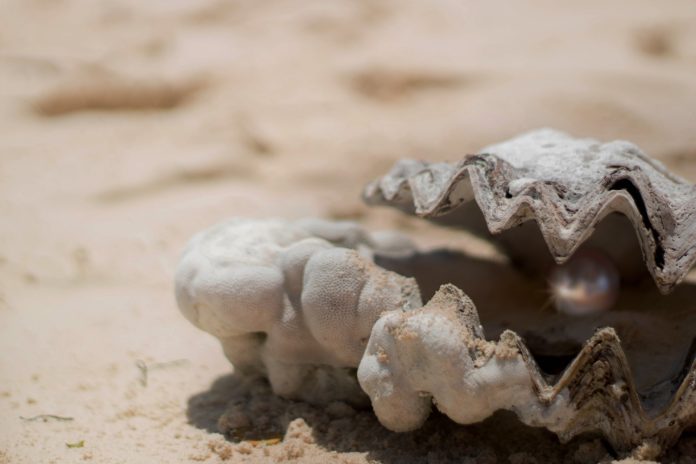 In Short: A natural pearl begins its life inside an oyster’s shell when an intruder, such as a grain of sand slips in between one of the two shells of the oyster, a type of mollusk, and the protective layer that covers the mollusk’s organs, called the mantle.

In Detail: Over 3000 years ago, a South Asian man was hungry so he decided to open some shells and feed himself. He became the first man to ever find a pearl!

In the past, pearls were in abundance in many parts of the world. Today, they are mostly in Bahrain and there are some reports of natural pearls from the Indian Ocean.

When nature does everything by itself a pearl can be shaped perfectly round. There are eight basic shapes. They can be round, semi-round, button, tear, pear, baroque and circled. Of course, the perfectly rounded are very rare and due to this, the most expensive. Man has found a way to produce pearls, but they are never as beautiful as those from the wild.

The largest ever natural Pearl 5 centimetres long, with a circumference of 10 centimeters. They can be valuable if found in the wild, but because they are very rare the majority of pearls are cultivated or farmed (made from pearl oysters). Pearls from the sea are more expensive than those from freshwater. Of course, there are fake ones too that are not very expensive at all.

During the development of cultured pearl oysters, some species start to make pearls in colour (they can be pink, ream, silk or gold) However, the most interesting is the black pearl. The oysters that produce these are from the species Pinctada margaritifera. They are called “black Tahitian pearls”, since they are farmed in Tahiti.

Historically, pearl hunting was the only way to harvest pearls. Divers would dive the ocean bottom or river bed and collect them. They had to check each pearl individually, because not every oyster has a pearl in it. In fact, from three tons of Oysters, only three or four will have pearls.