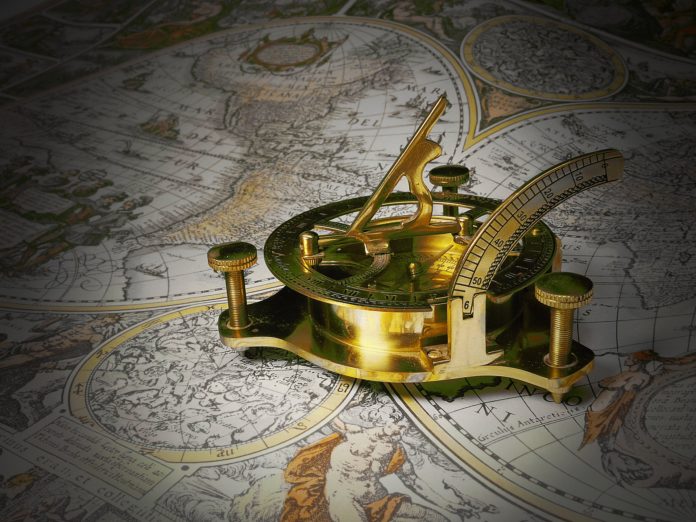 What is a Sundial?

A sundial is an ancient device, invented in ancient India, that shows the time of day when there is sunlight by the relative position of the Sun. It contains a flat plate (considered a dial) and a kind of a chronograph (gnomon), which reflects a shadow onto the dial. As the Sun appears to move, the shadow aligns with different lines, which are mentioned on the dial to tell the time of day. The style is the time-telling edge of the gnomon, though a single point or nodus may be used. The gnomon casts a broad shadow; the shadow of the style shows the time. The gnomon can be a rod or maybe a wire. The style must be parallel to the axis of the Earth’s rotation for the sundial to be accurate. The style’s angle from horizontal is equal to the sundial’s latitude.

The Origin of Sundial

Before clocks were invented, there was the Sun. Ancient cultures often allowed their lives to be regulated by the relative movement of the sun. The ancient acts of survival included hunting, fishing, and shelter in different seasons. Most of these actions required sunlight. Thus, when the sun rose, the people rose from sleep; when the sun set, the people soon closed their eyes to dissolve in the dream world.

The earliest sundials known from the archaeological record are shadow clocks (1500 BCE) from ancient Indian, Egyptian astronomy and Babylonian astronomy. Presumably, humans were telling time from shadow-lengths at an even earlier date, but this is hard to verify. The Roman writer Vitruvius lists dials and shadow clocks known at that time in his De architectura. A canonical sundial is one that indicates the canonical hours of liturgical acts. Such sundials were used from the 7th to the 14th centuries by the members of religious communities. The Italian astronomer Giovanni Padovani published a treatise on the sundial in 1570, in which he included instructions for the manufacture and laying out of mural (vertical) and horizontal sundials. Giuseppe Biancani’s Constructio instrumenti ad horologia solaria (c. 1620) discusses how to make a perfect sundial. They have been commonly used since the 16th century.

The Evolution of Sundial

Sundials were used to mark off sections of the day, but many were designed to work in specific latitudes. Some were sophisticated enough to have a removable stylus enabling the dial to be portable and usable at other latitudes. One method of measuring time used candles. Graduations on candlesticks would slowly melt away as the burning flame continued its descent.

Of course, none of these methods measured time very accurately. One could only gather approximations of the passage time. Mechanical clocks began to be developed in the 1300s. These were “weighted” clocks, dependent upon gravity to pull weights connected to timing gears. However, accuracy was still a challenge because of the friction within the gear mechanisms. These clocks were difficult to regulate for accuracy.

Spring-powered clocks were invented in the early 1500s. This enabled smaller clocks to be built, even portable clocks, because the hanging weights were no longer necessary; however, regulation was still a problem because as the springs unwound their clock-movement force would dissipate. While clocks could now sit on a table, or the mantel of a fireplace, they still had only an hour hand.

Mechanical clocks began taking many forms: Long-Case Clocks (also known as Grandfather Clocks), Mantel Clocks, Table Clocks, Wall Clocks, Bracket Clocks, et al. Many of these now fit under the category of Antique Clocks, or Collectible Clocks. In future postings we will center on a particular style of clock.