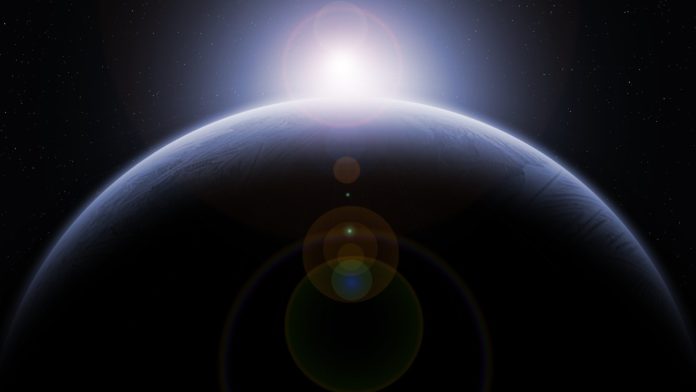 When Apollo 11 landed on the Moon in 1969, we were presented with our first human contact with the moon. The mission was able to accomplish the task of not only landing on the Moon, but also to return to the Earth with samples from the Moon. These samples along with subsequent presented us with answers regarding the composition of the Moon, which also gave us some basic facts that any theory about how the moon was created must answer/address. We learned:

Finding a theory that could satisfy all three of these specific facts would prove to be rather difficult. There have been three major theories about how the moon was created that have been discounted. Below we will discover what each of these three theories proposed and why they were deemed to be unlikely or impossible.

The Fission Theory proposes that the Moon was created in the early history of our solar system when something caused the Earth to break apart and a large part of the Earth was cast into space which eventually formed into the Moon. This idea supported the fact that the Earth and Moon share similar mantles, but where this theory falls apart involves the actual physics it would take to create such a scenario. The amount of angular momentum and energy required to create this situation would make the current placement of the Earth and Moon next to impossible. Thus, the fission theory has been deemed incorrect.

The Capture Theory reflects that the Moon came to be obtained by the Earth after it formed in a different location in the solar system, shedding light on the Moon’s different composition. There are two problems with this scenario. Since we know that the Earth and Moon have the same oxygen isotopes on their surfaces, therefore this would mean they would have the same amount of baking from the Sun, it doesn’t explain how the Moon would have encountered the extra baking on its surface. The physics behind this call for a lot of specific things to happen, such as the Moon entering Earth’s gravitational speed at just the right speed, at just the right distance to allow for the current set-up. Not only would it have to approach the Earth with these two requirements, but there would also have to be something that could slow the Moon down., however, capture into the Moon’s present orbit is very improbable. Something would have to slow it down with just the right gravitational pull to cause the Moon to fall into Earth’s orbit. While complicated, this could have been possible, but it is very unlikely.

Our third theory to discuss is the “Co-Formation Theory” which mentions that the Moon and Earth were formed within the nebular disk around the Earth. This theory falls short when one revisits the composition of the Earth and Moon. If the Moon did indeed share some of the same building material as the Earth did and form in the same area, it should be very similar in composition to the Earth. We’ve seen, however, that the Moon doesn’t share a significant iron core like our home planet does.

There is one theory which remains to be discussed, and it is the one that is widely accepted today.

The Giant Impactor Theory says that the Moon became a reality when an astronomical object the size of Mars slammed into the Earth shortly after the formation of our mighty solar system. After this object hit the Earth, tons of material from both the object and the Earth (Debris) were sent into space and began to orbit around the Earth. This debris slowly began to cuddle up together and collide until what we see as our Moon was created. This theory most easily explains the criteria we previously mentioned. The heat that would have been generated after the collision explains the evidence of “baking” on the Moon’s surface. It also supports the fact that the Moon doesn’t have a large iron core like the Earth. Finally, we have seen evidence of other such collisions in other parts of the solar system.