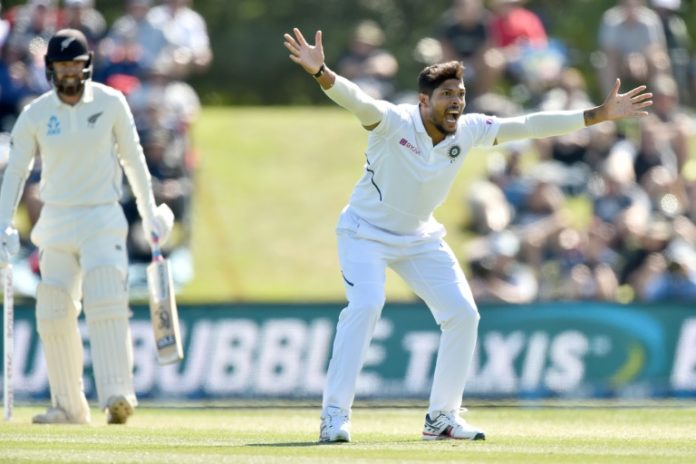 India roared back into the second Test against New Zealand on day two Sunday with five wickets including Kane Williamson and Ross Taylor before lunch in Christchurch.

New Zealand started the day at 63 without loss and ended the first session at 142 for five to trail India’s first innings by 100 with five wickets in hand.

Tom Latham posted a half-century but was dismissed soon after in a lone show of resistance against a fired-up Indian attack in which Umesh Yadav, Jasprit Bumrah, Ravindra Jadeja and Mohammed Shami shared in the dismissals.

Tom Blundell, after calmly playing through more than 90 minutes on Saturday evening, was the first to go for 30 having added only one to his overnight 29 before he was trapped in front by Yadav.

Bumrah quickly disposed of Williamson who lasted only eight balls before he belatedly poked at a wide delivery and was caught behind for three.

India at that stage had two for six in a stunning start to the day although the rest of Bumrah’s over proved expensive when two rash deliveries sailed through to the boundary to lift New Zealand’s total by eight byes.

Taylor’s attempt to steady the innings lasted 37 deliveries until the introduction of spin with Jadeja.

Taylor tried to smack the left-armer over long-on but instead top-edged the ball to point where an acrobatic Yadav held the catch.

Latham, who was 17 overnight, hung around long enough to reach his 17th half-century with a three off Shami and five balls later shouldered arms to the Indian quick and was bowled.

India captain Virat Kohli, who grew more animated with each wicket, just managed to get his fingers under the ball at ground level to remove Henry Nicholls for 14 off Shami.

At the interval Colin de Grandhomme was on eight with BJ Watling yet to score.