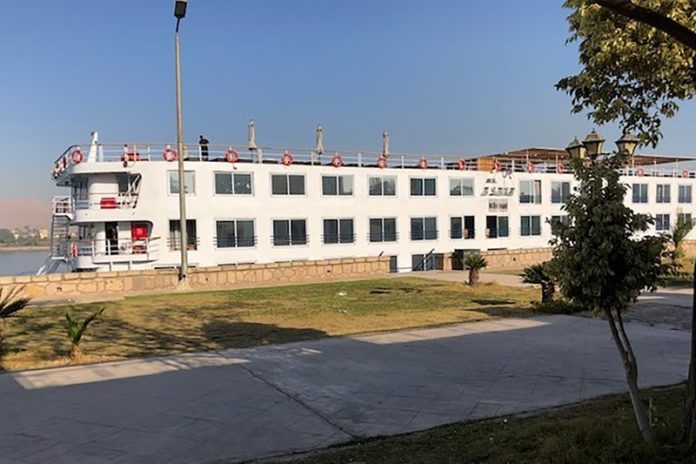 A cruise ship on Egypt’s Nile River with over 150 tourists and local crew was in quarantine Saturday in the southern city of Luxor, as 45 people on board tested positive for the new coronavirus, authorities said.

A Taiwanese-American tourist who had previously been on the same ship tested positive when she returned to Taiwan, the World Health Organization informed Egyptian authorities, who then tested everyone on the ship.

Health authorities first found that a dozen of the ship’s Egyptian crew members had contracted the fast-spreading virus, and said they did not show symptoms, according to a joint statement from Egypt’s Health Ministry and the WHO on Friday.

At a news conference in Cairo later Saturday, Health Minister Hala Zayed said 33 others tested positive for the virus. Of the total 45 infected passengers and crew, 19 were foreigners, officials said. Zayed did not elaborate on the nationalities of the non-Egyptians.

Officials said the 45 would be transferred to isolation in a hospital on Egypt’s north coast. The passengers — who include Americans, French and other nationalities — and the remaining crew remained quarantined on the ship awaiting further test results. The U.S. Embassy in Cairo said in a tweet it was working to provide consular services and assistance to the U.S. citizens affected.

The new cases brought to 48 the number of confirmed coronavirus cases in Egypt, including 21 foreign nationals and 27 Egyptians.

Amonios Salah, who works as a chef on the ship, told The Associated Press that the crew received an inquiry from the Health Ministry about crew members showing flu-like symptoms.

“Some of us were sick. Some with fever,” he said.

The 12 infected crew were isolated on the 3rd floor of the vessel away from the tourists, including two children, the 30-year-old chef said. The tourists then waited for test results.

The cruise started in Luxor, about 655 kilometers (405 miles) south of Cairo, on Sunday. The vessel, which includes 60 rooms, made three stops before reaching its destination at Aswan. On the return trip there were three more stops, Salah said, potentially expanding the number of people exposed to the virus.

“It’s still unclear how many people came in contact with the group in the infected ship,” said a senior police officer in Luxor. Cruise ships on the Nile often dock side by side, with passengers getting on and off by walking through several other vessels. The officer spoke on condition of anonymity because he wasn’t authorized to talk to reporters.

Egyptian authorities have been tight-lipped about the virus outbreak, previously reporting only three confirmed cases even as the wider Mideast now has over 6,000 confirmed cases.

In hard-hit Iran, meanwhile, the Health Ministry said Saturday that 21 more people had died from the virus, bringing the death toll to 145. More than 1,000 new infections were also confirmed overnight, bringing the total to 5,823 cases nationwide.

Among the dead was Fatemeh Rahabar, a 55-year-old newly elected lawmaker who passed away in Tehran, the state-run IRNA news agency reported Saturday. She’d been elected to the next parliament that begins work in May. Earlier this week, Iranian lawmaker Abdolreza Mesri told state television that 23 members in the current parliament had the coronavirus, and urged all lawmakers to avoid the public.

The new cases in Egypt came just days after three people were diagnosed with coronavirus in the U.S. state of Texas. Officials in the city of Houston said Thursday that they believe the three were exposed to the virus while on a trip to Egypt in late February.

On Saturday, officials in the U.S. state of Maryland said three people — a married couple in their 70s, and a female in her 50s — tested positive in Montgomery County and had contracted the virus while on an Egyptian cruise of the Nile River.

It wasn’t immediately clear if the Maryland and Texan tourists were on the same boat where the cluster occurred, how long the passengers on the ship had been quarantined, nor where exactly the initial Taiwanese tourist had contracted the virus.

The new and fast-spreading coronavirus could deliver a major blow to Egypt’s tourism industry. The government has been struggling for years to revive the vital sector following the country’s 2011 Arab Spring uprising.

Other countries around the world have closed schools and universities, while also cancelling major art, sporting and business events. Egypt does not appear to have taken any of these types of measures, and the discovery of the 45 cases coincided with the opening day of the Luxor African Film Festival.

The country’s national air carrier, Egypt Air, has suspended direct flights to China since late January. The virus, which originated in China, has infected more than 100,000 people globally.

Elsewhere in the region, the United Arab Emirates reported 15 additional coronavirus cases Saturday, bringing the total number of infections in the country to 45. To stymie the spread of the virus, the UAE has suspended schools, nurseries and universities for a month. It has also stopped flights to Iran and limited flights to China.

Saudi Arabia, meanwhile, announced there would be no spectators for sports competitions and games starting Saturday to combat the spread of the virus. The kingdom has five confirmed cases, but has taken unprecedented measures against the virus’ spread, including halting all pilgrimage in Mecca, Islam’s holiest site.