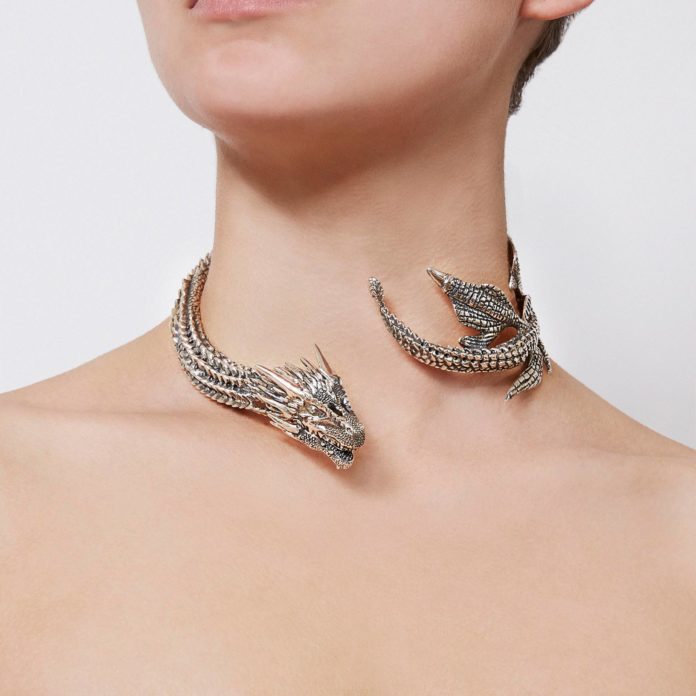 What does unite the west and the east, combines good and evil, male and female, as well as the forces of heaven and earth? The correct answer is the dragon. People have always been obsessed with this mystical creature. Some considered him a destroyer; others think he is a protector and a keeper of secret knowledge. People were terrified of his power and at the same time, they sought his help. Despite the conflicting emotions he causes, the dragon does not leave anyone indifferent. That is why dragon images are found on rings, pendants, earrings, and many other jewelry items. Perhaps you, too, find the images of dragons beguiling and want to solve their mystery? Then, stay tuned and take a look at dragon meanings in jewelry from all over the world.

The word ‘dragon’ comes from the ancient Greek ‘derkien’ which means ‘seeing’. The images of dragons have long been used in the east as amulets. Unlike Europe, where the dragon was pure evil, the dragons of the east are supportive of man. They can positively and creatively impact human’s fate. Dragons are able to bring good luck, scare demons away, and even bestow immortality.

The Japanese consider dragons to be creatures whose strength and power is second to gods. They are endowed with great knowledge and wisdom. The most powerful among Japanese dragons is Ranzin. He is an aquatic creature that has powers over seas and oceans. According to legends, his daughter became the wife of the first Japanese emperor.

Indian dragons are called nagas. They are the kings of waters and depths of the earth. They are wise and unspeakably rich. If a person wanted nagas to help them with something, they brought treats and jewelry as offerings.

Tibetan dragons absorbed features of both the Indian nagas and their Chinese counterparts. There are many tales and legends about dragons in Tibet. Most of the temples are embellished with dragon images and patterns. Local residents claim that even today, you can come across a dragon in secluded Himalayan valleys. If you happen to meet him, your life will become much luckier and happier. If we see a falling star, we make a wish. Tibetans make a wish when they spot a flying dragon.

People of Nepal also believe that dragons still live in our world, somewhere behind inaccessible mountains. Their images in diverse poses are one of Nepal’s favorite motifs in ethnic jewelry.

A dragon pendant, ring, necklace or earrings, are an excellent idea to express your love for this flying serpent and maybe even win his favor. The first thing you need to think about is what kind of a dragon you like the most – silver or gold.

Gold (yellow) dragons are the most powerful creatures. They are also known as emperor dragons. They seek evil and fight to the death to irradiate it. The Golden Dragon is a symbol of wealth, prosperity, good luck, and vitality. Jewelry depicting dragons in gold will suit strong and independent persons who subtly feel the imperfection of our world and want to make it fair to everyone.

Silver dragons are the second most powerful of metal dragons. They are friendly to many races and are looking for a company of people. They often take the form of humans and live among us for most of their lives. They inhabit mountains and quite often help people in trouble. Silver dragons do not feel the need for a strict social structure yet they try to live honestly and fairly. The dragon cast in silver will become the patron saint of freedom-loving, friendly, and sincere individuals who truly want to help people in distress.

Dragons, no matter what race or clan they belong to, have always been associated with countless treasures. They say that every dragon has a den crammed to overflowing with gold, precious metals, and gems. The legends of treasures affected the way jewelers and artisans portray dragons – they adorn them with precious stones in every way to emphasize their wealth. You can often see dragons with ruby, sapphire, or emerald eyes or heads strewn with small shine jewels. Such extravagant pieces will appeal to flamboyant personas who love a riot of colors and sparkle of precious stones. If in-your-face luxury is not really your thing, you can benefit from a full-metal dragon ring that as if curls around your finger. It is an original and noteworthy design that won’t leave artistic personalities cold.