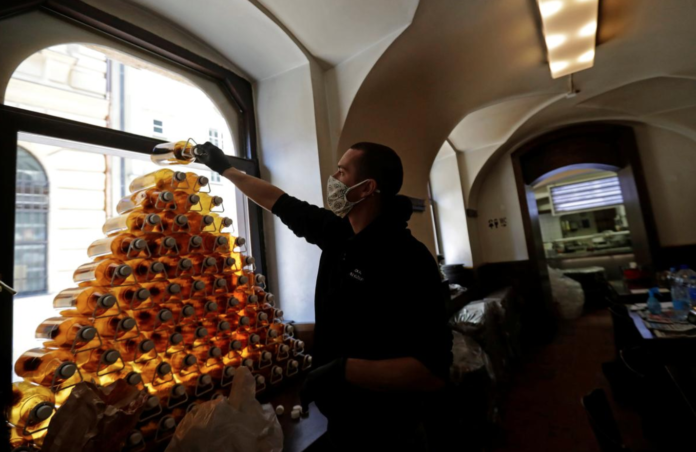 Czech breweries — including Pilsner Urquell and Budejovicky Budvar — have stopped refilling kegs and started storing their beer in cooled cellars as they seek to limit damage from pub closures caused by the coronavirus outbreak.

Breweries have also ramped up bottle and can production lines to offset a loss from keg sales both abroad and in the Czech Republic, which leads the world in per capita beer consumption.

“Nobody knows when the pubs will reopen,” said Petr Kofron, manager of the Pilsner brewery in Prague, owned by Japan’s Asahi (2502.T).

“Most neighboring countries took the same measures and shut their pubs so export has shifted into bottles and cans,” he told Reuters.

“Bottle lines and cans are running at full tilt. We hope our customers buy bottles and cans while they are at home.”

The Czechs implemented some of Europe’s toughest restrictions to blunt the coronavirus spread, banning non-essential movement while closing shops and restaurants, except for food and drugstores.

While pubs and some breweries still sell take-away beer to a smattering of walk-up customers, the drop in demand in a nation where residents drink an average 141 liters of beer per person annually has rippled through the industry.

As well as big drinking Czechs, the hordes of thirsty tourists who descend on Prague and other cities also help to keep the beer flowing in the country’s pubs.

Czechs drink more draught beer in pubs than other nations, which makes the closures especially painful for smaller breweries that rely on keg sales. The industry group representing small brewers has warned a quarter could go bust due to the coronavirus lockdown.

Lucie Tkadlecova, co-owner of the Uneticky brewery outside Prague, said production has plummeted to zero and sales to not much above that level since the government shuttered pubs in the middle of the month.

The brewery offers take-away containers but selling them to a wider market has proved challenging with supermarkets and online shops having their hands full, she added.

“We tried to contact big supermarkets and e-shops but they are all overwhelmed with the work of selling products they already have,” she said.

“If this goes on much longer we will have to throw beer away.”

Safeguarding the supply line also spurred a number of special measures, including a requirement that external delivery drivers take a temperature check before going on to premises and remain in the truck while brewery workers load the beer.

Dvorak and others have faith that Czechs will still want a drink when pubs and beer gardens reopen but wonder how many of their publicans can survive a prolonged shutdown.

“I’m not worried about Czechs not returning to the pubs and drinking beer,” he said. “I’m more worried about how many pubs will re-open.”