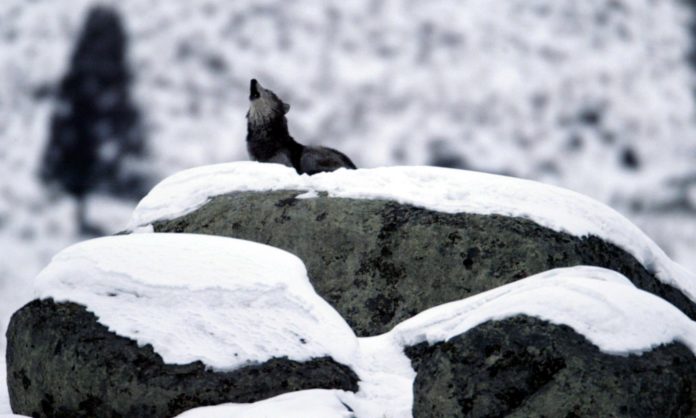 Around six million years ago, towards the close of the Miocene era, the earth’s climate gradually cooled. This lead to, as you all know, an ‘Ice Age.’ In many areas, forests and savannahs were replaced with steppes or grasslands, and only those species of creature that adapted to these changes would survive.

In southern North America, small woodland foxes grew bigger and better adapted to running, and by the late Miocene the first of the genus Canis had arisen—the ancestors of coyotes, wolves and the domestic dog. In eastern Africa, a split occurred among the large primates. Some remained in the trees, while others came down from the trees, learned to walk upright, developed larger brains, and in the more open country learned to avoid predators while becoming predators themselves. The ancestors of humans and dogs would ultimately meet in Eurasia

Human hunter-gatherers did not live in fear of nature and knew that they posed a formidable risk to any potential predators. Today, the Ju’wasi people of Namibia share their land with prides of lions. Both species coexist with respect and without fear or hostility in a relationship that may go back to the dawn of modern humans. The lion is a much larger and far more dangerous predator than the wolf. Early modern humans entering Eurasia and first encountering packs of wolves may have been assisted in living among them because of the traditional beliefs of their African ancestors. In historical times, mutual respect and cooperation with canids can be found in the stories and traditions of the indigenous peoples of Siberia, East Asia, North America, and Australia.

The domestication of animals commenced over 15,000 years before present (YBP), beginning with the grey wolf by nomadic hunter-gatherers. It was not until 11,000 YBP that people living in the Near East entered into relationships with wild populations of aurochs, boar, sheep, and goats. A domestication process then began to develop. The grey wolf most likely followed the commensal pathway to domestication. When, where, and how many times wolves may have been domesticated remains debated because only a small number of ancient specimens have been found, and both archaeology and genetics continue to provide conflicting evidence. The most widely accepted, earliest dog remains date back 15,000 YBP to the Bonn–Oberkassel dog. Earlier remains dating back to 30,000 YBP have been described as Paleolithic dogs, however their status as dogs or wolves remains debated. Recent studies indicate that a genetic divergence occurred between dogs and wolves 20,000-40,000 YBP, however this is the upper time-limit for domestication because it represents the time of divergence and not the time of domestication

The date estimated for the evolutionary divergence of a domestic lineage from a wild one does not necessarily indicate the start of the domestication process but it does provide an upper boundary. The divergence of the lineage that led to the domestic horse from the lineage that led to the modern Przewalski’s horse is estimated to have occurred around 45,000 YBP but the archaeological record indicates 5,500 YBP. The variance can be due to modern wild populations not being the direct ancestor of the domestic ones, or to a divergence caused by changes in the climate, topography, or other environmental influences. The evolutionary divergence time for the wolf and dog is indicated to have occurred somewhere between 20,000-60,000 YBP but this does not imply that domestication occurred during this period.

The Origin Based on modern DNA

Numerous genetic studies have found that the dogs from Southeast Asia and South China show more genetic diversity than those dogs from other regions, suggesting that this was the place of their origin.

In 2002, a study of maternal mitochondrial DNA (mDNA) found that there were more dog mDNA haplotypes found in East Asia than in other regions of the world. In 2009, a study found similar mitochondrial diversity in African village dogs. In the same year, another study indicated that the greatest mDNA diversity could be found in dogs originating in south-eastern Asia south of the Yangtze River, in particular the Chinese province of Yunnan and Southeast Asia, questioning the African finding. In 2012, Y-chromosome DNA (yDNA) sequences indicated the south-western part of south-eastern Asia that is south of the Yangtze River, comprising South-East Asia and the Chinese provinces of Yunnan and Guangxi, because of the greater diversity of yDNA haplogroups found there.

In 2015, a whole genome analysis of indigenous dogs from China and its border with Vietnam were compared with indigenous dogs from Africa and dog breeds from other regions. Based on the higher genetic diversity of the East Asian dogs, the study concluded that dogs originated in southern East Asia, which was followed by a migration of a subset of ancestral dogs 15,000 YBP towards the Middle East, Africa and Europe, then reaching Europe 10,000 YBP. Then, one of these lineages migrated back to northern China and admixed with endemic Asian lineages before migrating to the Americas.

An East Asian origin has been questioned because dog fossils have been found in Europe dating around 15,000 YBP but only 12,000 YBP in far eastern Russia. The reply is that archaeological studies in East Asia lag behind those in Europe, and that the environmental conditions in southern East Asia do not favor the preservation of fossils. Although primitive forms of the dog may have existed in Europe in the past, the genetic evidence indicates that these were later replaced by dogs that have migrated from southern East Asia. This implies two origins for the dog.

In 2017, a literature review found that this study sampled only east Asian indigenous dogs and compared their patterns of genetic diversity to those of breed dogs from other geographic regions. As it is known that the genetic bottlenecks associated with formation of breeds strongly reduce genetic diversity, this was not an appropriate comparison. As the study’s author has stated, “Such dramatic differences in genetic diversity can be influenced both by ancient and recent history of inbreeding.”

In 2010, a study using single nucleotide polymorphisms indicated that dogs originated in the Middle East due to the greater sharing of haplotypes between dogs and Middle Eastern gray wolves, indicating that Middle Eastern wolves were the source of domestic dogs and not East Asian wolves. Else there may have been significant admixture between some regional breeds and regional wolves. In 2011, a study found that there had been dog-wolf hybridization and not an independent domestication, with southern East Asia being the most likely origin of dogs based on their higher level of genetic diversity. In 2012, a study found that the nuclear genome of dogs derived from wolves originating in the Middle East and Europe.

In 2015, a DNA study looked at autosomal, maternal mitochondrial genome and paternal Y chromosome diversity in purebred and village dogs from 38 countries. Some dog populations in the Neotropics and the South Pacific are almost completely derived from European dogs, and other regions show clear admixture between indigenous and European dogs. The indigenous dog populations of Vietnam, India, and Egypt show minimal evidence of European admixture, and exhibit high diversity and low linkage disequilibrium consistent with a Central Asian domestication origin, followed by a population expansion in East Asia. The study could not rule out the possibility that dogs were domesticated elsewhere and subsequently arrived in and diversified from Central Asia. Studies of extant dogs cannot exclude the possibility of earlier domestication events that subsequently died out or were overwhelmed by more modern populations. In 2016, this finding was questioned by a whole genome study that included linkage disequilibrium data from east Asian indigenous dogs and found these exhibited a lower level than those of the central Asian dogs, indicating an East Asia origin. This assessment was then called to question because of a negative bias caused by the low coverage used in the genome sequences. In 2017, a literature review found that because it is known that the genetic bottlenecks associated with formation of breeds raise linkage disequilibrium, the comparison of purebred with village dogs was not appropriate.

Based on ancient DNA

Most genetic studies conducted over the last two decades were based on modern dog breeds and extant wolf populations, with their findings dependent on a number of assumptions. These studies assumed that the extant wolf was the ancestor of the dog, did not consider genetic admixture between wolves and dogs, nor the impact of incomplete lineage sorting. These pre-genomic studies have suggested an origin of dogs in Southeast Asia, East Asia, Central Asia, the Middle East, or Europe. More recently, the field of Paleogenomics applies the latest molecular technologies to fossil remains that still contain useful DNA.