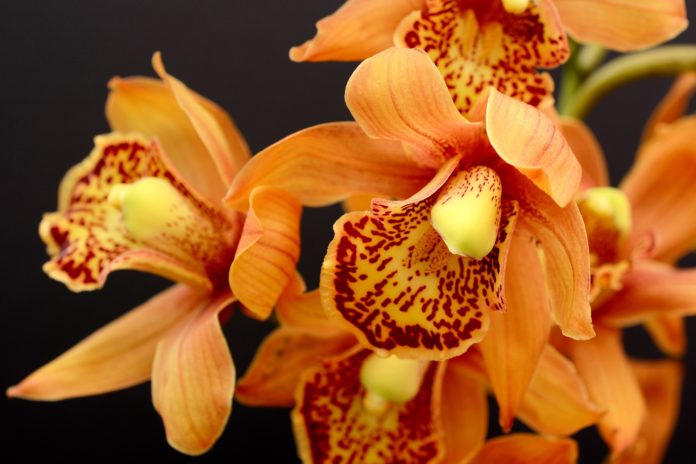 The word orchid is derived from the Greek word orchis, meaning testicle. The bulbs of orchids look like testicles, and for this reason they are known to be aphrodisiacs.

The history of the orchid goes back to the dinosaurs! Harvard researchers studying the fossil remains of a bee trapped in amber, found on its back pollen from an orchid 76 to 84 million years old. To this day the orchid holds the record for the oldest evidence of plant pollen.

The earliest mention of an orchid appears in an ancient Chinese medical text of the 28th century BC. Confucius (551-479 BC) called the orchid the ‘King of Fragrant Plants’. Subsequent Chinese writers refer to the orchid with many meanings including retirement, friendship, perfection, numerous progeny, and all things feminine, noble and elegant.

Japanese legend holds that a sterile Emperor’s wife inhaled the scent of the orchid Cymbidium Ensifolium and went on to have 13 children. Japanese enthusiasm for orchids grew to such an extent that fortunes were made selling them. The orchid economy became so disruptive that the Emperor forbid on the pain of death the growing of orchids.

The next earliest mention of orchids appears among the ancient Greeks around 350 BC. Here we also find the origin of the word orchid or “orchis” – a reference to the Greek word for testicle as mentioned above in the one paragraph. Like the Chinese, the Greeks considered orchids to have medicinal properties for healing and stimulating the reproductive system.

The first European discovery of the orchid is credited to Cortez. When he entered Mexico in 1519 looking for gold, the Aztecs gave him a vanilla flavored cacao drink used by the great leader Montezuma to fortify himself. Natural vanilla extract comes from the orchid Vanilla planifolia, and the Aztecs were the first to cultivate vanilla or tlilxochitl not only as a drink but also as a perfume, healing herb, and aphrodisiac. The word ‘vanilla’ is derived from the Spanish word, vainilla, which in turn came from the Latin ‘vagina’ for pod or sheath. Today vanilla is still used by some for medicinal uses such as relieving nausea and improving food intake in patients receiving chemotherapy. Mexico was the original source of all vanilla. Today it is grown in many parts of the world, but chiefly in Madagascar, the source of 80% of the vanilla imported into the United States.

The earliest mention of an orchid in English literature is a medical text of 1568. Orchids aren’t generally known in Great Britain until the 1700’s when we see imports from the West Indies and China. By the end of the 1700’s 15 species were growing at the Royal Botanic Gardens in London, and very few anywhere else due to the difficulty growing them outside their native tropical environment.

The came William Cattley. In his day it was fashionable for the wealthy to have large greenhouses called “stove-houses”, so named for being heated to tropical temperatures by steam pipes from coal-fired boilers. In these structures many tropical plants flourished, except the orchid. Cattley persisted and in 1818 one of his orchids flowered. He showed it to the prominent botanist of the time, John Lindley, who is still regarded as an important orchid taxonomists. Lindley named the plant Cattleya labiata in honor of Cattley. But the orchid remained a rare plant outside the tropics until 1845 when Jean Linden studied the orchid in its natural environment. His reports resulted in a burst of orchid growing in England. Collectors began to hunt all over the tropics for new specimens. And so began the depletion of natural orchid habitat and the extinction of certain varieties. Prized specimens sold for a fortune, giving rise to the perception of the orchid as a “rich man’s plant.”

In 1856 the first orchid hybrid was created, and today there are over 100,000 hybrids. But to this day the perfect black orchid remains illusive.

Orchid history is still in the making. In 2009 the smallest orchid was discovered in the roots of another plant in the mountains of Ecuador. This tiny orchid is only 2.1mm wide with petals no thicker than a cell.

Orchid habitat destruction is an increasing concern. The clearing of forests to harvest lumber or create pasture lands is seriously decreasing the world’s wild orchid population. However, we can end on a positive note by pointing out that in recent years, the cultivation of orchids for export is helping the economies of orchid-rich but cash-poor countries, as well as helping to preserve habitat and native species.