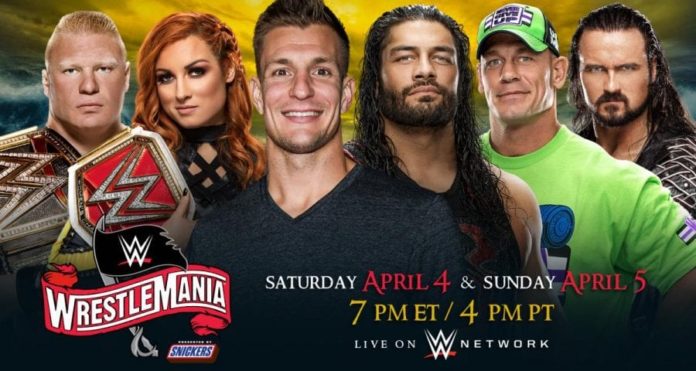 Here are some backstage news and notes on the WrestleMania 36 pay-per-view event, which will air on the WWE Network next Saturday and Sunday. Thank you ewrestlingnews.com for this news.

• Multiple people were immediately pulled off all the shows this week due to illness concerns. Some of those said they were sick and others didn’t feel sick, but had fevers above the WWE cut-off of 100.4. Several others told WWE officials that they didn’t feel comfortable coming in for the show.

• As reported earlier here on eWn, Buddy Murphy is sick and didn’t come to the TV tapings this week. According to sources, nobody who was showing signs of being sick was allowed close to the building, even if they only had a cough or a stuffy nose.

• In an update on Asuka and Cesaro not being cleared for WrestleMania 36, that is not the case and both actually appeared on the show. They are both currently healthy as well. We apologize for the earlier error. Asuka apparently worked a not-yet-unannounced Women’s Tag-Team Championship match at WrestleMania 36.

• WWE was still promoting several WrestleMania 36 matches, including Goldberg vs. Roman Reigns, on tonight’s SmackDown broadcast. They even advertised the two coming face-to-face next week on SmackDown. As noted, the shows were taped this past week and they are going to need to do some post-show edits next week. While WWE hasn’t announced it yet, Goldberg will now be facing Braun Strowman at WrestleMania 36.

• WWE United States Champion Andrade did not work the WrestleMania 36 tapings this week after suffering a rib injury during Monday’s Raw where he teamed with Angel Garza to defeat Ricochet and Cedric Alexander. Andrade and Garza were to challenge The Street Profits at WrestleMania but Andrade was replaced by WWE NXT Superstar Austin Theory, according to POST Wrestling. Theory was introduced as the replacement to team with Garza. An angle will likely air on Monday’s Raw to explain why Theory is replacing Andrade in the match. The injury is “very minor” but bad enough that he was not going to be medically cleared to compete.

• Edge vs. Randy Orton was successfully taped earlier this week.

• The AJ Styles vs. The Undertaker “Boneyard Match” and the John Cena vs. Bray Wyatt WrestleMania 36 matches were successfully taped at alternate locations (not the WWE Performance Center) this past week.

• Otis vs. Dolph Ziggler was successfully taped for WrestleMania 36.

• Mandy Rose was supposed to be the referee for the Otis vs. Dolph Ziggler match but that appears to have been changed.

• Sami Zayn vs. Daniel Bryan for the Intercontinental Championship has been taped for WrestleMania 36.

• Jerry Lawler was not used for WrestleMania 36 out of concern for his age. WWE has also been very careful with Lawler due to the heart attack he suffered on RAW several years ago.

• Dana Brooke and Rey Mysterio were pulled from the show due to being in quarantine.

• During the TV tapings, a very select few people were allowed inside the building. That included the talents working their respective matches, the cameramen, and Vince McMahon himself. Others were waiting outside or kept alone in small rooms backstage.

• Lastly, the entire WrestleMania 36 show has already been taped for those unaware. They’ve also taped the post-WrestleMania episodes of RAW and NXT. The entire staff and crew are back at home just waiting to hear more on what they’ll be doing next.