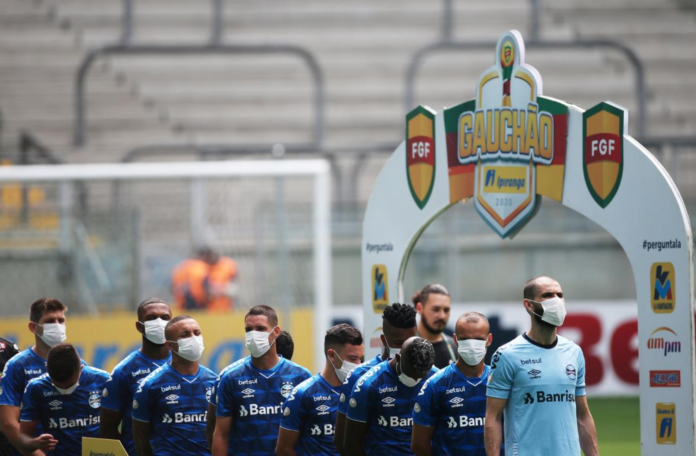 The coach of Brazilian club Gremio threatened to strike on Sunday after he and his players took to the field wearing masks to protest having to play a soccer match in the midst of the coronavirus panic.

Renato Portaluppi led his players out of the tunnel to play Sao Luiz and the starting 11 lined up wearing white masks over their faces.

His team won the Gaucho state championship match 3-2 in front of empty stands at the Gremio arena.

Portaluppi warned authorities Gremio were willing to strike unless they call a halt to the footballing programme.

“It is time for Gremio to take a stand and that was to wear masks to alert authorities that players are people too,” he said. “We are not immune to viruses.”

“There’s no point in closing the doors to fans. So the fans are protected and screw those who work in football.”

“The whole world has stopped, shouldn’t Brazilian football stop as well? That’s our message and I hope they listen. We hope that good sense will prevail.”

The halt covers the Brazilian Cup, the women’s first and second divisions and youth leagues. The main national championships, Series A through D, do not start until May.

The suspension does not cover the state championships, with the CBF saying each state will have to decide whether or not to keep playing.

The protest came as players and clubs across South America begin to complain at decisions by footballing authorities to order games to be played, but behind closed doors.

Flamengo coach Jorge Jesus appealed for football to be halted, saying players needed to be protected because “they are not super human”.

In Argentina, River Plate refused to play their Superliga cup tie against Atletico Tucuman on Saturday. The Buenos Aires club closed their stadium, leaving match officials and an advance team from Atletico outside the ground.