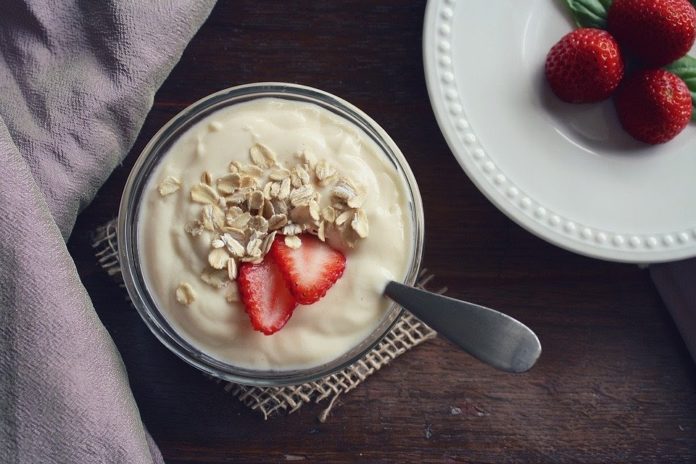 Yogurt is an important element of Bulgarian cuisine and is an ingredient in almost all traditional Bulgarian foods. It is said that Bulgarian Yoghurt is the most popular kind of yogurt in the world, after Greek Yoghurt!

Traditionally called ‘Kiselo Mlyako’, Bulgarian Yoghurt is a mildly sour yogurt that is one of the best and the healthiest of dairy products that are available in the markets of today. Bulgarians, for this reason, call it sour milk instead of yoghurt. This is an incredibly ancient food item and is believed to have been discovered about 4000 years ago and is a wonderful source of probiotics and comes under the category that contains live bacteria.

The typical Bulgarian Yoghurt is made with 2 very specific types of starter bacteria which are Lactobacillus bulgaricus and Streptococcus thermophiles. Though these two types of bacteria are generally found in many other types of yoghurt, these other yogurts also contain many varied kinds of bacteria and are not just restricted to these two. It is this particular combination of bacteria that creates and provides Bulgarian Yoghurt with its typical features which include its thickness, aroma, acidity, and taste.

Consuming Bulgarian Yoghurt has quite a few benefits to it and they are as follows:

–  Bulgarians are known to live long and healthy lives with a number of people aged a hundred years or older. The reason for this? The Bulgarians claim that it’s the working magic of their yogurt!

– It is one of the best sources of probiotics and the live bacteria can be very good for health when eaten in recommended amounts.

– Bulgarian Yoghurt helps in strengthening the immune system and is even capable of fighting off tumors by preventing its growth.

–  With Bulgarian Yoghurt, you can now have dairy as part of your diet without any guilt at all! Since this is an organic yoghurt, it is perfectly fine to add this to your diet menu. Thus, Bulgarian Yoghurt is nutritionally sound and is a good source of protein and makes you feel fuller faster.

–   It has a high level of calcium and this helps prevent bone-related issues such as osteoporosis. Additionally, it can help reduce those nastily high levels of cholesterol.- Active cultures in Bulgarian Yoghurt help deal with gastrointestinal infections and conditions which include intolerance to lactose, colon cancer, H. Pylori infection, constipation, diarrhea, and inflammatory bowel syndrome.

Bulgarian Yoghurt is generally available in both, the whole milk and low-fat varieties, so you can choose the one that best suits your needs. Since this kind of yoghurt is wholly unstrained in general, it is able to retain all of the calcium and the other nutrients that are available in the milk used to make the yoghurt. The best part of Bulgarian Yoghurt is that it can easily be made even at home with just a few simple ingredients that are easily available. Additionally, it can even be flavored according to your taste!

Bulgarian Yoghurt has a ton of benefits to it and it is known to be one of the tastiest yogurts available in the market. This means you can get the best of both worlds – taste, and health. So making the switch to a healthier and guilt-free dairy product such as Bulgarian Yoghurt is a smart choice to take. Since it can even be made at home, it is a convenient step to take to better your health.  Additionally, this is a versatile food item and can be paired with a number of other foods to create a balanced and tasty meal.