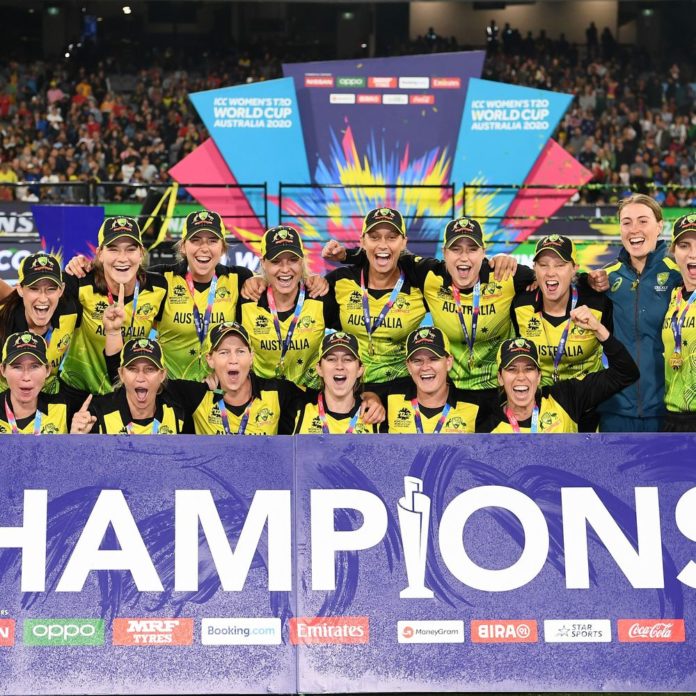 A record-breaking attendance for a women’s cricket match of 86,174 watched on as Australia downed first-time finalists India by 85 runs at the MCG, with the openers setting the tone for a clinical performance.

The pair put on 115 and never looked back, with Healy (75) lighting up Melbourne with a jaw-dropping display. India’s bid to chase 185 was always going to be difficult, with leading wicket-taker Schutt taking the first four-wicket haul in a final to restrict Harmanpreet Kaur’s side to 99 all out.

For Meg Lanning, meanwhile, the greatest moment in her career is complete – following in the footsteps of Lyn Larsen and Michael Clarke in winning an ICC event as Australia captain on home soil.

Indian nerves were evident immediately and Healy ensured she pounced with three boundaries off Deepti Sharma’s opening over. Two more fours off Shikha Pandey took Healy beyond 2000 T20I runs, and in Mooney (78*) she had her familiar and unflappable ally, making India pay after Rajeshwari Gayakwad dropped a tough return chance.

Still the Australians kept coming, Healy striking the biggest six of the tournament at 83 metres before repeating the trick down the ground to maintain the flying start. Another straight four brought up Healy’s half-century from just 30 balls, the fastest in the final of any ICC event, with India needing to stem the tide with 91 scored at halfway.

Three successive sixes over long on, long off and then cover took Healy to the highest score in a Women’s T20 World Cup final while the opening duo combined for the second century partnership in the showcase.

Finally the respite came for India with Healy miscuing Radha Yadav to Veda Krishnamurthy at long-on, the record-breaking partnership ending at 115 within 12 overs. Healy’s 75 featured seven fours and five sixes in the 39 balls but a consistent Mooney kept on her merry way, reaching her 50 from 41 balls to end the 15th over at 142/1.

With four overs to go, Australia already had the highest score in a Women’s T20 World Cup final but captain Lanning (16) then fell to Deepti, caught at square leg. And it was two in the over as Ashleigh Gardner – player of the final two years ago – missed a straight one and was stumped.

India threatened to slow the rate with Rachael Haynes bowled by Poonam Yadav but Mooney kept going to carry her bat, surpassing Healy’s 75 to bag the highest score in a Women’s T20 World Cup final.

The records didn’t stop there either, with Mooney’s total tournament tally of 259 runs the most scored by one player in a single Women’s T20 World Cup.

India’s chase started in disappointing fashion with Shafali Verma brilliantly caught behind by Healy off Schutt. One became two as Jemimah Rodrigues could only chip Jess Jonassen (3/20) to Nicola Carey at mid-on, leaving Kaur and Smriti Mandhana to begin the rebuild.

Back-to-back fours got Mandhana going but her bid for a third proved her undoing, chipping Sophie Molineux’s first ball to mid-on to leave India at 18/3.

The captain found the boundary off Jonassen but perished next ball, a top-edge flying to Gardner who took a good catch just inside the deep mid-wicket rope. For the first time in 15 matches, India lost four wickets in the Powerplay to make an already tough task even harder in Melbourne.

Deepti and Krishnamurthy (19) began the rebuild until the latter holed out to mid-off off Delissa Kimmince, ending a positive partnership of 28. Richa Ghosh then came out to the middle, a concussion replacement for Taniya Bhatia, who had to leave the field during her earlier batting effort. The 16-year-old Ghosh (18) batted valiantly, but the required rate continued to rise with 104 needed from the last five overs.

Sharma (33) holed out to Mooney off Carey as a professional Australia outfit did what they have done in four finals previous, with execution of skills hitting perfection on the biggest stage of all.

Schutt finished with a four-wicket haul, including the final scalp of Poonam Yadav, with her 13 wickets the most in this edition of the Women’s T20 World Cup.

India finished all out for 99, with the 85-run deficit far from reflective of their efforts in the tournament.