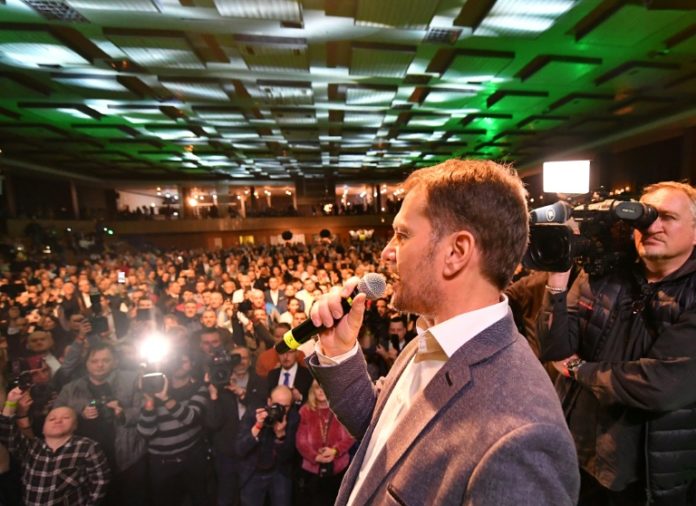 Slovak voters handed a resounding victory to the centre-right, anti-graft OLaNO opposition party in Saturday’s general election, dominated by an angry backlash over the 2018 murder of a journalist probing corruption in the eurozone state.

Having vowed to immediately push through anti-corruption measures should he win office, OLaNO party leader Igor Matovic galvanised voter outrage over the murder of Jan Kuciak and his fiancee and the high-level graft their deaths exposed.

“We will try to create the best government Slovakia has ever had, with the help of the other leaders of the democratic opposition,” Matovic told journalists as he claimed victory after the exit poll results were announced.

“It was the death of Jan Kuciak and Martina Kusnirova that woke up Slovakia,” he added.

OLaNO took 25.8 percent of the vote ahead of a stinging 14.9 percent for the governing populist-left Smer-SD party, while the liberal PS/Spolu claimed third spot with 9.7 percent, according to a Focus agency poll commissioned by the Markiza TV station.

Analysts have indicated that OLaNO will have the option of considering several opposition parties for a coalition.

“There is a chance that this new government will last until the end of its term,” said Slovakia analyst Tomas Koziak, the Rector of the University of Political Sciences based in Kutna Hora, Czech Republic

“These parties have been in opposition for a very long time, therefore their top politicians are thirsty for power. Power is the strongest glue,” Koziak told AFP.

President Zuzana Caputova told reporters earlier on Saturday she would consider the “coalition potential” of party leaders when deciding whom to task with creating a government.

Allegedly a hit ordered by a businessman with connections to politicians, the killings of Kuciak and Kusnirova have become a lightning rod for public outrage at graft in public life.

“Change is much needed here,” said Daniela Jonasova, a 35-year-old office clerk, who told AFP she voted for OLaNO at a Bratislava polling station.

According to Bratislava-based political analyst Radoslav Stefancik, “the election is primarily about the desire for decency in politics.

“Instead of protesting against the ruling Smer-SD party on the streets, people will do so in polling stations,” Stefancik told AFP.

The double murder triggered the largest anti-government protests since communist times and toppled Fico as prime minister, with his party colleague Peter Pellegrini taking up the reins.

It also propelled Zuzana Caputova, a liberal lawyer and anti-graft activist, out of nowhere to win last year’s presidential race in the country of 5.4 million people.

The Focus exit poll also showed the conservative We Are Family with 7.8 percent, the liberal Freedom and Solidarity (SaS) 7.5, the liberal “For the People” of ex-president Andrej Kiska with 6.5 percent and 5.1 percent for the KDH Christian democrats.

All could plausibly be partners for OLaNO.

The Smer-SD lacks any obvious coalition partners and has ruled out teaming up with the far-right LSNS Our Slovakia party.

Currently holding 10 seats in Slovakia’s 150-seat unicameral parliament, LSNS appears to have failed to capture more support with its anti-establishment and anti-Roma posture.

Analysts suggest that OLaNO leader Igor Matovic, a 46-year-old media-savvy MP but unpredictable politician, will become premier if he manages to unify the splintered opposition.

An eccentric self-made millionaire and former media boss, Matovic set up “Ordinary People and Independent Personalities — OLaNO” a decade ago.

Referring to the Greek myth of a many-headed monster, Matovic urged Slovaks to “come out massively to vote and cut off the last head of the Hydra of corruption” as he cast his ballot in his native Trnava, western Slovakia.

But not all voters were fed up with Smer-SD.

“Fico has character. He’s a real politician. Everyone else lacks the experience and knowledge as how to run a country,” Bratislava pensioner Iveta told AFP.

She said that benefits which Smer-SD introduced for pensioners and students, like free trains, were a factor in her decision.

Heavily dependent on car-making, economic growth in the Slovak economy is projected to slow to 2.2 percent this year, according to the European Commission’s latest forecast.

Unemployment is relatively low and stood at around 5.6 percent in late 2019.