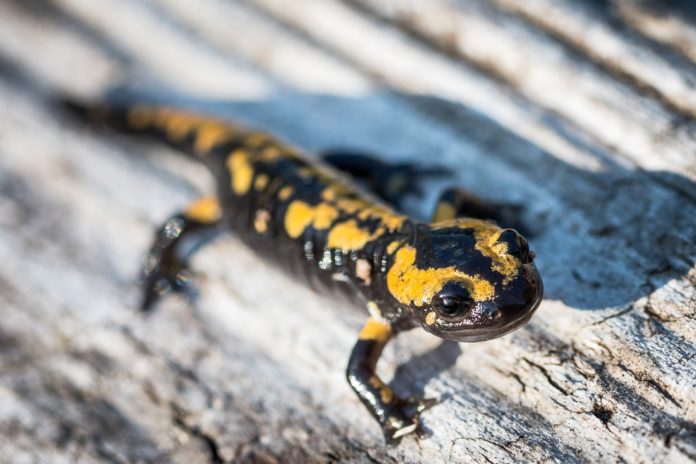 According to wikipedia, Amphibians are ectothermic, tetrapod vertebrates of the class Amphibia. Modern amphibians are all Lissamphibia. They inhabit a wide variety of habitats, with most species living within terrestrial, fossorial, arboreal or freshwater aquatic ecosystems. Thus amphibians typically start out as larvae living in water, but some species have developed behavioural adaptations to bypass this.

As the name (from Greek, amphibios, meaning ‘having a double life’) suggestions, the amphibians are capable of moving, feeding and breathing equally well on land or in fresh water though, in most cases, they breed only in water. All modern amphibians are vertebrates, that is, they have a vertebral column and a skull; they also have four limbs. They are commonly referred to as ‘cold-blooded’ but this means that their temperature varies with that of the air or water. A frog in warm water would have correspondingly warm blood.

Frogs and toads have no tails and their hind legs are much larger than their front legs. This is an adaptation to leaping and swimming. Newts have tails and their limbs are equal in size. They swim by wriggling their bodies like a fish with the limbs relaxed and trailing. On land they use their limbs to walk or crawl. Frogs, by extending their long hind legs can progress on land by leaping, but they may also crawl. In water the hind legs thrust backwards against the water, so propelling the frog forward. The webbed toes provide an increased surface for pushing against the water.

Mature amphibians are carnivorous, eating worms, slugs, beetles flies and other insects. Frogs and toads have a long sticky tongue, joined to the front of the lower jaw. It can be flicked out rapidly to pick insects off leaves or even in flight.

Amphibians breathe through their skin all the time, whether they are on land or in water. The skin is richly supplied with blood capillaries. Oxygen from the air or dissolved in water diffuses through the skin and into the blood, to be carried to all parts of the body. Frogs and newts have smooth slimy skins. Toads’ skin is warty and comparatively dry. In addition, the amphibians have lungs which come into use when the demand for oxygen is higher than usual, e.g. after activity. Amphibians have no ribs or diaphragm. Air is pumped through the nostrils and into the lungs by movements of the mouth floor. Gaseous exchange also takes place through the lining of the very wide mouth cavity.

Frogs, toads and newts spend the summer months on land, mostly in damp vegetation where evaporation of water from their skin is at a minimum. In winter they ‘hibernate’ either in holes in the ground or in the mud at the bottom of ponds but in spring they migrate to a freshwater pond or lake to lay their eggs. Fertilisation is external but, in frogs and toads, there is a behaviour pattern that ensures that sperm is shed at the moment of egg laying. In the water, the males mount on the backs of the females gripping them firmly under their front legs with special pads on their thumbs. The males may be carried about for days in this fashion but as soon as the eggs begin to be laid, the male releases sperm which fertilises them.

Newts have internal fertilisation. The male produces a spermatophore, a package of sperm, which the female takes into her cloaca. Some days later she deposits the fertilised eggs singly, attached to pondweed.

In frogs and toads, the thin layer of jelly round the eggs swells up on contact with water to produce the familiar clumps of frog spawn or strings of toad spawn. The black, spherical eggs undergo rapid development and in a few days the tadpoles emerge to feed initially on the algae growing on pondweed. During the next four weeks or so, the tadpoles increase in size developing a distinct head and tail and swimming vigorously. In the final seven weeks, the tadpoles metamorphose into frogs. Their legs grow, their tail shortens and their diet changes to a carnivorous one. They congregate at the margin of the pond and after a shower of rain they hop or crawl out of the pond into the damp vegetation. In about 4 years, they grow to full size and are able to breed.

Amphibians, at large, have taught the world how to adopt, adapt and survive even in the most troublesome situations. Nature is a great teacher. We must learn from it because it is too late.