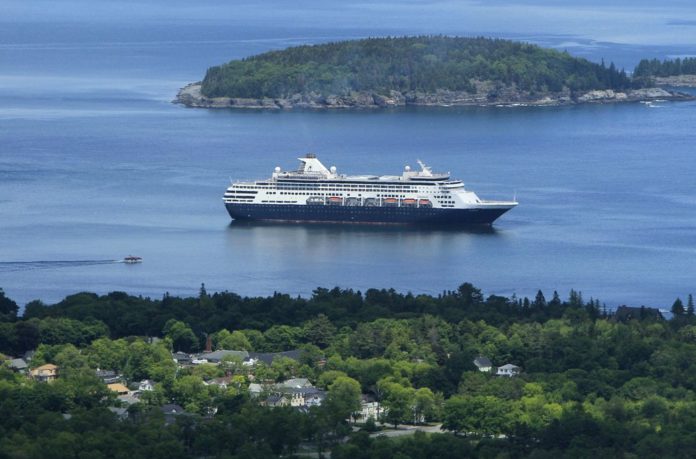 Two cruise ships won’t be allowed to disembark in Honolulu after being turned away by other ports, even with no positive cases of coronavirus on either vessel, officials said Wednesday.

State and cruise line officials previously said passengers would disembark at Honolulu Harbor. However, U.S. Rep. Tulsi Gabbard, who is running for president, said during a telephone town hall Wednesday that the state Department of Transportation “made the difficult, but correct, decision to only allow the Maasdam and Norwegian Jewel cruise vessels … to come into port solely to take on fuel and resupply, in Honolulu Harbor.”

The Maasdam, operated by Holland America Line, had its port call canceled in Hilo and is set to arrive Friday to Honolulu Harbor, state officials said. It has 842 guests and 542 crew members.

Norwegian Cruise Line said one of its vessels that was turned away by Fiji and New Zealand is expected to arrive to Honolulu on Sunday. The Norwegian Jewel, with about 1,700 passengers, refueled in American Samoa but was not allowed to disembark at the Port of Pago Pago.

New measures to seal borders to reduce the spread of the coronavirus have left some cruise ships stranded as local governments deny permission to disembark.

Two vessels were rerouted to Miami after they were turned away from their home port in Puerto Rico, even with no reports of infections. Authorities in Argentina, Chile and Brazil placed ships on quarantine after reports of positive coronavirus tests.

The Cruise Lines International Association said about 40 ships with 90,000 passengers were at sea when President Donald Trump announced a ban last week that restricts travel by many foreigners to the U.S.

News that the Maasdam previously planned to arrive in Hilo on Hawaii’s Big Island — after dozens of other ships canceled port calls for fear of spreading coronavirus — sparked worry, with many calling for the ship to be redirected or even for civilian vessels to physically block the Maasdam’s entrance to the harbor, the Hawaii Tribune-Herald reported.

The transportation department said previously officials were working to direct the Maasdam to Honolulu Harbor so passengers will have flight options out of Honolulu’s Daniel K. Inouye International Airport.

“It has been confirmed that there will be no disembarking of passengers, not even to go straight from the port directly to Honolulu airport to catch their flight home,” Gabbard said. “After they are refueled and resupplied the ships will be sent off to another destination that is not Hawaii that will allow them to discharge their passengers.”

There will be teams ensuring that people don’t disembark the ships, Lt. Gov. Josh Green said during the telephone town hall.

Edmund Pinto, a passenger on the Norwegian Jewel and a former Associated Press editor, said Wednesday that “we have been told so many times we can disembark, only to be told the day before we couldn’t.”

Gov. David Ige on Tuesday asked people to postpone island vacations for at least 30 days as the state tries to slow the spread of the coronavirus.

Holland America Line’s Westerdam cruise ship arrived Monday in Honolulu with no passengers. The ship departed from the Philippines on March 2 with with 680 crew and 18 contract service staff, who all tested negative for COVID-19 in mid-February, the cruise line said in a statement. The ship sailed for more than a month with no port calls, the statement said.