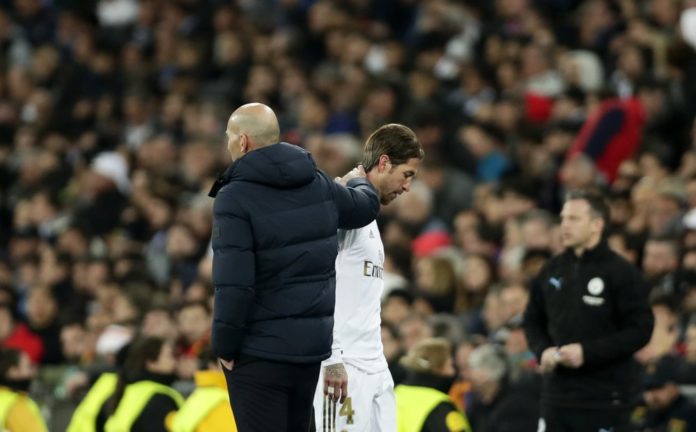 In Real Madrid’s first 34 matches this season, the team lost only three times.

In the last three games, however, Madrid was beaten twice and held to a home draw — the club’s worst run of the season and coming just before Sunday’s “clásico” against Barcelona at the Santiago Bernabéu Stadium.

“I see Sunday’s game as an opportunity for us to change our fortunes around,” Madrid coach Zinedine Zidane said. “It’s a bad moment for us, I agree, but on Sunday we have a great chance to change that.”

Madrid’s latest setback was a 2-1 loss to Manchester City on Wednesday in the first leg of the last 16 in the Champions League. Before that, Madrid had been beaten by Levante and held by relegation-threatened Celta Vigo to a draw that dropped the team behind Barcelona at the top of the Spanish league standings.

Madrid also went three games without a win in December, but that run included away draws in difficult matches against Valencia and Barcelona, in addition to a home draw against Athletic Bilbao.

Madrid’s other losses this season came at Paris Saint-Germain in the group stage of the Champions League, at Mallorca in the Spanish league and against Real Sociedad in the Copa del Rey.

“During three or four months we did things really well and had good results,” Zidane said. “Now in the last three matches we had a draw and two losses, that’s tough for us. We have to be more united than ever, stronger than ever, and keep working hard to change this dynamic, and on Sunday we have a good chance to do it.”

The Frenchman dismissed the notion that fans have lost confidence in the club because of the recent results, especially the setbacks at home. The loss to Man City was just the latest decisive match the team failed to win at the Bernabéu. In the Champions League, Madrid has won only three of its last 10 European matches at the stadium.

“We need the fans to keep their trust in us and come back here on Sunday to support us,” Zidane said. “We gave everything we had in these last few games and played well despite the bad results. We can’t control everything in soccer.”

Madrid struggled to create many chances against Man City but Zidane felt the team played well except for the last 10 minutes, when the English club scored twice to rally to a 2-1 win.

“We made mistakes, but they are part of soccer,” Zidane said. “The only thing we can do is analyze them closely.”

Barcelona, meanwhile, will enter the “clásico” at the Bernabéu carrying the momentum of four straight league victories and an away draw at Napoli in the Champions League on Tuesday.

The Catalan club also will enter Sunday’s match with a four-game winning streak against Madrid in league games at the Bernabéu. Barcelona is unbeaten in seven straight matches against Madrid, with its last loss coming in the 2017 Spanish Super Cup at the Bernabéu. In the league, Madrid’s last home win dates back to 2014, although it won at the Camp Nou in 2016.

Barcelona was the team struggling early in the year amid an institutional crisis that included a controversial coaching change and conflicts between players and team officials. Now it has a two-point lead over Madrid, the smallest point difference between the clubs when playing the second league “clásico” of the season since 2015.

“It will be another great match,” Zidane said. “We need to recover and be ready to play well on Sunday.”