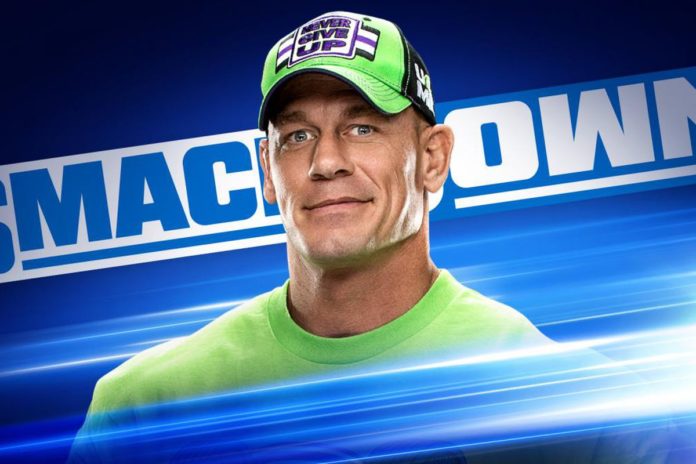 WWE Super ShowDown was yesterday. The WWE roster made it back to the United States and they’re ready for SmackDown in Boston.

The new Universal Champion came out. The Fiend belt is gone and the blue title is back. Then again, it was back as soon as he won it. Convenient that they brought both belts to ringside even though The Fiend only carried his custom to the ring.

Goldberg started to talk and he got some boos. He said “do not be mistaken. It’s not about who was last. It’s all about who’s next.”

Then he dropped the mic and Roman Reigns came out.

Roman stood there and they had a face to face for a moment. The crowd went wild. Then Roman Reigns said: “I’m next.” Mic drop. Hit Roman’s music. That’s it.

Bayley took the mic and said it’s ridiculous and she shouldn’t even have to be there today. Then Bayley introduced Sasha Banks as a future Grammy Award winner.

The match got started quickly and Naomi returned fire with a rear view and then Banks jumped in. It was a two on one account until Lacey Evans ran down.

Referees broke it up and it was restarted as a tag team match.

This match started out with dual dropkick to the outside from Evans and Naomi followed by stereo dives on Banks and Bayley.

Naomi started taking abuse from Bayley and Banks and they isolated her. Banks was able to keep Naomi from making the tag as she tagged in and out with Bayley to keep a fresh woman in the match for the heels.

Bayley nailed a mule kick and a jawjacker, but Banks held on. Then Naomi finally made the tag and Evans came in fired up with kicks and a slingshot elbow drop from the apron.

Evans hit a Bronco Buster and tagged Naomi who hit a cross body for a two count. Banks sent Evans outside and hit a backstabber on Naomi. Then Evans dragged Banks outside the ring and they brawled.

Naomi kicked Bayley and hit a sunset flip pin for the win.

They played another John Cena clip. This time John Cena vs JBL at WrestleMania 21 when he won the WWE Title.

Roode hit a shoulder block for a one count and then he got a headlock. Then Roode took control with some strikes and chops. He was working slowly.

Kofi landed on his feet off a flip from Roode and then Kofi caught an arm before Roode turned it back around and landed an elbow to the back of the head.

Kofi landed an elbow after a drop down and leap frog combo off the ropes. Ziggler went to the apron and distracted the referee. Roode rolled outside and he kicked the steel steps and laid down acting like Big E attacked him. This caused the referee to kick Big E out. That was some nice heel action.

When we came back from commercial Robert Roode had Kofi in another headlock.

They showed Mandy Rose backstage watching the match as Corey Graves talked about how Mandy is Dolph’s new “main squeeze.”

Kofi returned fire with a dropkick finally and Roode went to the apron and caught Kofi’s neck with the top ropes for a two count.

Roode tried to suplex Kofi, but Kingston fought out. Then Roode punched him in the ribs and finally got that suplex. He sat on the top rope and mocked Kofi with the New Day Rocks claps. He went for a kneedrop, but Kofi moved and went to the apron.

Then Kingston hit a springboard chop and a dropkick and a clothesline. He hit a Boom Drop and got hyped up. He missed Trouble In Paradise and then Kofi hit a crossbody off the top for a two count.

Roode nailed a Full Nelson slam to counter an SOS for a two count. They fought up top and Roode was sent down. Kofi jumped down and Roode hit a spinebuster for another near fall.

Kofi blocked a Glorious DDT and hit the SOS, but Dolph put Roode’s foot across the ropes. Then Roode rolled up Kofi for the win.

They showed Otis watching backstage and he was sad. Tucker showed up. He said there’s something not right about Mandy going out with Ziggler. Tuky said “sometimes the guy doesn’t get the girl, sometimes Dolph Ziggler gets the girl. I think you gotta let Mandy go.” Then Tucker said that they’re gonna get Otis out there and get him the love that he deserves. Otis said: “Oh yeah, Tucky, you’re right.”

They played another John Cena highlight. This time it was his match against the Rock at WrestleMania in MetLife Stadium.

Renee Young hosted this segment as a special contributor. She introduced Braun Strowman and Shinsuke Nakamura. Hopefully, Nakamura will be okay by the Elimination Chamber. That powerslam on the baby grant piano gashed his head open badly.

Sami Zayn said to hang on for a second and he told Braun Strowman to “grab a seat” so Braun picked up a chair and threw it to the middle of the entrance ramp.

Zayn said he wanted to read the contract. He said how they’ve been treated is a travesty of justice.

Sami tried to shame Braun for hurting Nakamura last week. Braun told him to shut up and everyone is sick and tired of hearing him bitch and moan. He said at the end of the day he’ll have to fight all three of those clowns so give me the damn contract and I’m signing it.

Zayn said “so you’re willing to fight all 3 of us?” Braun asked if Sami was really gonna spin it like that. Then they altered the contract because apparently Sami Zayn can do that. They all signed the contract.

So, it’ll be a handicap IC Title match at Elimination chamber match.

Braun moved the table and wanted to fight. Then Braun lost to the numbers game as Sami hit a Helluva Kick and Nakamura nailed a Kinshasa. Then they put Braun Strowman through the table.

They confirmed Goldberg vs Roman Reigns for the Universal Title at WrestleMania.

These two had a great little match as Drew Gulak sat at ringside and talked Axel up on commentary.

They showed yet another moment from John Cena’s greatest hits. This time it was his 16th World Title win at the 2017 Royal Rumble.

Miz and Morrison were very happy with themselves. Then they confirmed the Elimination Chamber Tag Team Title match that we previously reported.

The Usos came down and they worked the mic a bit before a match was started.

The Usos vs Miz & Morrison

The Usos worked on Miz and isolated him.

We saw a glitch that is either for Ali or Killer Kross depending on who you ask.

The Miz turned thing around on Jimmy. He tagged Morrison and he hit a forearm for a two count. Then Morrison choked Uce off the bottom rope as Miz hit a cheap shot.

The champs kept tagging in and out. Then Miz kept Uce down with a headlock. Jimmy moved and Miz missed a spear and he went outside. Morrison had taken the blind tag so he went in. Then Miz pulled Jey away as Jimmy was about to tag.

Morrison hit a springboard kick for a two count. The Miz took a Samoan Drop from Jimmy and he kicked out at two.

Morrison was lifted to the apron and he hit a forearm before climbing up. Jimmy tagged in and Morrison punched him down before trying for Starship Pain, but Uce kicked him and hung him up in the ropes.

Miz was kicked off the apron and the Usos hit a Canadian destroyer off the top and a splash for the win.

Cena’s music hit and the Boston crowd cheered him like they’re supposed to.

He said that his heart is beating and he hyped up the Boston crowd. He got some chants and then asked “What am I doing here?” He said it’s WrestleMania season. Now they get to answer what he’s doing at Mania.

He said his road has changed but he is and will always be a WWE Superstars. “So what am I doing at WrestleMania?” He said he’s doing something different.

Cena said that he knows how hard it is to get a WrestleMania moment and he always listens to the biggest Superstar of them all: the WWE Universe.

Cena said he hears the fans after every show and they’re all passionate about the future of WWE. He said “I feel you because I am too.”

Big “Cena” chants broke out as he continued. He said he understands that he can do whatever he wants to WrestleMania and it’ll probably happen. He said he’s doing the right thing. “This year WrestleMania should go on without John Cena.”

The crowd booed. He said this is not goodbye. He said it is the right thing to do and it’s goodbye for now. He said WrestleMania spots should be earned and not demanded so this year he won’t be competing. People booed harder.

He said that he doesn’t know the next time he’ll be back. He was choking up a bit. He said it feels pretty damn good to be home in Boston to make this announcement. He hopes the world is listening too.

Cena put the microphone down and his music hit. Then he started to leave up the ramp after saying goodbye to some young fans at ringside.

He stood at the entrance ramp and game a final salute. Then the lights went down and The Fiend showed up.

The Fiend pointed to the WrestleMania sign. Then Cena tipped his hat to The Fiend and the lights went out. That was that.