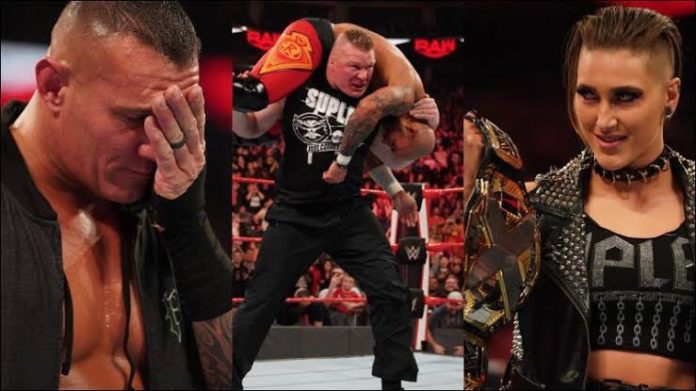 Randy Orton came to the ring to explain his actions against Edge at the end of last week’s Raw, but the crowd booed him for like 13 minutes, so he left.

1. Liv Morgan defeated Lana. Morgan won a quick match with her finisher, a rope-assisted Flatliner. After the match, Morgan’s old Riott Squad leader Ruby Riott returned to TV after being injured for nine months. She faked a hug, and then attacked Morgan. When that was done, Lana also attacked Morgan.

3. Elimination Match: Buddy Murphy and AOP defeated Kevin Owens and the Viking Raiders. Seth Rollins hit a sneaky Stomp on Erik behind the referee’s back, allowing Murphy to pin and eliminate Erick. Meanwhile Ivar, who had missed a cross-body on the floor and crashed into the ringside LED board, left the match with a shoulder injury. Owens was able to pin Murphy with a pop-up powerbomb, and Akam shortly thereafter, but Rezar pinned and eliminated Owens with multiple spinebusters to win the match.

– Goldberg will be on this week’s Smackdown.

Steve Cook from The Biggest Loser was in the crowd.

Humberto Carrillo was interrupted by Zelina Vega and her newest recruit, Carrillo’s cousin Angel Garza. Vega and Garza atacked Carrillo, and Garza tried to Hammerlock DDT Carrillo on the exposed arena floor until Rey Mysterio made the save.

Charlotte Flair came to the ring to announce her choice of champion to challenge at WrestleMania, saying that it’s hard to decide because she’s held both championships and beaten both champions so many times. Flair was interrupted by NXT Women’s Champion Rhea Ripley, who noted that she’d pinned Charlotte, but Charlotte’s never pinned her. Ripley challenged Flair, but Flair calmly left the ring, only stopping to “woo” once she’d gotten to the stage.

6. Asuka defeated Natalya by submission with the Asuka Lock after a “distraction” from Kairi Sane. After the match, Asuka said she wanted another match for the Raw Women’s Championship. Becky Lynch showed up and accepted. That match happens on next week’s Raw.

– Charlotte Flair will be on this week’s NXT to answer Rhea Ripley’s challenge.

7. Number One Contender Match: Ricochet defeated Seth Rollins and Bobby Lashley. This was to find a challenger for Brock Lesnar at WWE Super Showdown in Saudi Arabia. Kevin Owens and Erik from the Viking Raiders brawled with AOP during the match. Ricochet pinned Lashley after a 630 senton, and was immediately F-5’d by an attacking Brock Lesnar.