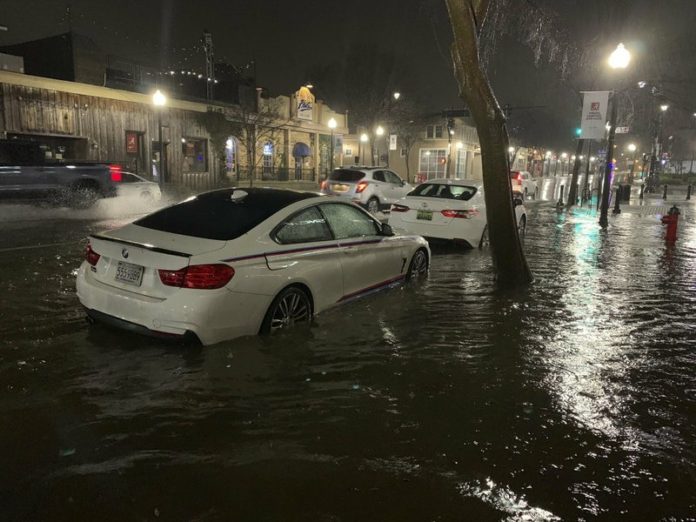 The storm front destroyed mobile homes and flooded streets in Alabama, and a path of splintered trees and sagging power lines reached from Louisiana to Tennessee. Roofs were peeled off across a wide area of hard-hit Mississippi.

Earlier, the line of storms brought four inches of snow to southern Texas and paid a violent visit to New Orleans, collapsing scaffolding at the Four Seasons Hotel construction site onto at least a dozen cars Wednesday and sending one person to a hospital. Hail pounded downtown streets and high winds shattered the glass on two revolving doors.

Lines of storms moved early Thursday through Alabama, where one person was killed and another was injured as high winds destroyed two mobile homes near the town of Demopolis, the Storm Prediction Center reported. It wasn’t immediately clear whether a tornado was to blame.

Tree limbs and fences were toppled when a possible tornado hit the Birmingham suburb of Helena, officials said, and some roads and parking lots were covered by floodwaters. Downtown streets also flooded near the University of Alabama in Tuscaloosa.

More than 5 inches of rain fell in the Tennessee Valley region, and forecasters said more than 6 inches could fall near the Alabama-Georgia line.

At least 40 Alabama school systems shut down or opened late as a precaution to allow time for the storms to pass.

A yellow taxi was found abandoned in high water early Thursday on the I-459 ramp to I-65 North in Birmingham, Alabama, according to news outlets. The ramp was reopened at about 8 a.m. with cones placed around some water. News outlets also reported voluntary evacuations at an apartment complex in Homewood due to flooding.

More than 10,000 homes and businesses were without power in Mississippi and Alabama, and outages were rising in neighboring Georgia as storms moved into the state.

Tornado and flood watches covered large parts of Mississippi, Alabama, Georgia and the Florida Panhandle Thursday morning. A tornado warning in the Atlanta suburb of Lawrenceville said the storms were capable of producing a twister. Some schools in the area had children huddle in hallways as the weather moved through.

Snow also was falling in places from the upper Midwest into New England, where a few inches was expected on the coast of Maine and up to 16 inches could fall in the New Hampshire mountains before sunny skies take hold over the weekend.

The same weather pattern dropped snow along the Mexican border in El Paso, Texas, and freezing temperatures were expected to preserve Wednesday’s accumulations from the Red River Valley of Texas through Oklahoma, prompting school systems to remain closed Thursday in those areas.

The winter storm mostly missed a parade to celebrate the Kansas City Chiefs’ Super Bowl win, sparing fans from all but a few flurries.

Snowfall was heavier to the east, where several tractor-trailers and passenger vehicles collided Wednesday on a bridge over the Missouri River near Rocheport. Missouri State Highway Patrol Sgt. Scott White said at least one person was taken from the scene in an ambulance.

“The biggest impact has been snarled traffic from jack-knifed semis,” Stewart said.