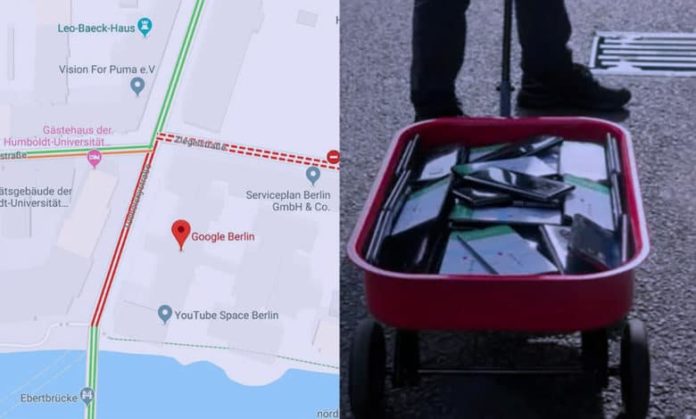 (IANS) After a German artist, Simon Weckert demonstrated how he “hacked” Google Maps with 99 smartphones and a wagon to create “virtual traffic jams” on the streets of Berlin, Google responded to the incident saying it “appreciates” creative use of maps.

Admitting that it has not quite cracked travelling by wagon, the tech giant also hinted that it might use cases like this to improve how its maps work.

“We appreciate seeing creative uses of Google Maps like this as it helps us make maps work better over time,” 9to5Google quoted a Google spokesperson as saying.

In a YouTube video, Weckert showed that he put 99 smartphones with Google Maps onto a small wagon cart and then wheeled that cart around various streets in Berlin, including outside the Google office, Android Authority reported on Monday.

The smartphones “apparently fooled Google Maps” into thinking that there was a high concentration of users on those streets.

Because the second-hand phones were in a cart, Maps was further tricked into believing that the traffic was slow-moving.

As a result, the navigation app started showing virtual traffic jams by turning green streets to red in the online navigational tool, showcasing how digital technology can have a real impact on the real world.

“Traffic data in Google Maps is refreshed continuously thanks to information from a variety of sources, including aggregated anonymised data from people who have location services turned on and contributions from the Google Maps community,” the Google spokesperson said.

“We’ve launched the ability to distinguish between cars and motorcycles in several countries including India, Indonesia, and Egypt, though we haven’t quite cracked travelling by wagon,” the statement added.