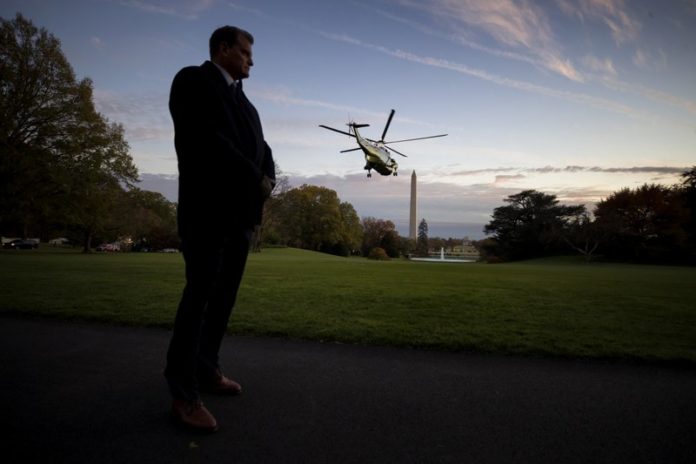 The White House is throwing its support behind a plan to transfer the U.S. Secret Service back to the Treasury Department to better focus on the growing threat of online financial crimes.

Shifting the agency from within the Department of Homeland Security to the Treasury would require action from Congress, but President Donald Trump is confident enough that he plans to include the Secret Service under the Treasury’s budget in his proposal expected Monday, according to five administration officials with knowledge of the move. The officials spoke to The Associated Press on the condition of anonymity to discuss ongoing negotiations.

The Department of Homeland Security’s intense focus on immigration has only added to the growing divide between what the Secret Service sees as its dual missions — protecting the president and investigating financial crime — and the mission of its parent department. But there are strong concerns the Secret Service’s departure could lead to the eventual dismantling of DHS, which was formed after the Sept. 11, 2001, attacks as a counterterrorism agency bringing together security agencies across the government.

The Secret Service is best known as the agency responsible for protecting the president, but its original purpose when it was formed in 1865 was to investigate financial crimes such as counterfeit money proliferating during the Civil War. It was housed under the Treasury until 2003, when it was transferred to the new Department of Homeland Security.

Only about half of the Secret Service’s budget is spent on protective services. It also has a robust cybercrime division, state-of-the-art forensic labs and a threat assessment center that studies how to mitigate and train against threats. The agency’s annual budget of about $2.3 billion would shift from one department to another under Trump’s proposal.

In the Trump era, DHS has been highly focused on immigration, one of the Republican president’s top priorities, leaving other agencies unrelated to immigration out of the spotlight.

Department of Homeland Security officials initially pushed back against shifting the Secret Service back to the Treasury, concerned it could spark an exodus from other agencies contained within DHS, a 240,000-person department that also includes disaster relief, the U.S. Coast Guard and the Transportation Security Administration, according to the officials. DHS referred questions to the White House.

The Secret Service is “part of a unique cohort that gets lost in the massive bureaucracy,” said Breanne Deppisch, who studies the topic for the Aspen Institute think tank.

Deppisch said she feared the news could be a blow to other non-immigration agencies at Homeland Security, specifically the newly formed Cybersecurity and Infrastructure Security Agency, tasked with election security. She worried it could deepen recruitment problems at other agencies and lower morale, which is already low department-wide.

It’s not the first time such a move has been considered in recent years. After a high-profile prostitution scandal in 2012 and other missteps, Democrats and Republicans in Congress debated whether the agency should be relocated, broken up or shrunk.

A feasibility study was completed last year from a working group of Homeland Security, the Treasury and the White House, and the results found that moving the Secret Service would help enhance collaboration in the Treasury and would put the Secret Service back on the map as a large law enforcement agency, though it could harm morale at Homeland Security.

“DHS employees, members of Congress and staff, the homeland security committee — may perceive a weakened DHS with the loss of Secret Service,” the working group wrote in the report. “Such a loss could open DHS up to additional reforms or reorganizations, perhaps even some involving the transfer or dismantling of other operating components, further weakening the department at a critical time in its development.”

The Secret Service would be the second largest agency at the Treasury after the Internal Revenue Service, which could result in more attention and a morale boost for staff, according to the report, initially published by The New York Times and obtained by the AP. It would give the Treasury back a law enforcement and investigative capability to protect financial infrastructure and payment systems.

Secret Service leadership recommended the move, according to the report.

“The Secret Service has been involved in discussions regarding the potential move and is appreciative of the active interest in advancing its integrated mission” according to an agency statement.

Treasury Secretary Steven Mnuchin said on Fox Business this week that he expected legislation to be introduced soon.

“We think it will very much help us in combating money laundering and terrorist activities,” he said of the move.

He approached the leaders of the Senate Judiciary Committee with the proposal, and they were open to it. But it may not be that simple to convince lawmakers — not all senators with a stake in the agency voiced support, and some House Democrats are strongly opposed.

Democratic Sen. Diane Feinstein’s office said as part of the proposal she asked to include reports on the cost of presidential travel to include details of presidents’ families, too, to provide “greater transparency, accountability and oversight.”

Trump signaled a few weeks ago that he approved of the Secret Service transfer.

“The President and his administration support the bipartisan efforts of Senator Lindsey Graham and Senator Dianne Feinstein to return the Secret Service to its historic home at the U.S. Department of the Treasury,” White House spokesman Judd Deere said in a statement. “This transfer will improve the Secret Service’s ability to carry out its integrated, dual mission of protection and investigations.”

The head of a union representing Secret Service agents said he hadn’t seen the proposal.

The first presidential protection job for the agency came in 1894, when it started protecting President Grover Cleveland. Agents eventually began protecting other government officials including Cabinet members and presidential candidates.