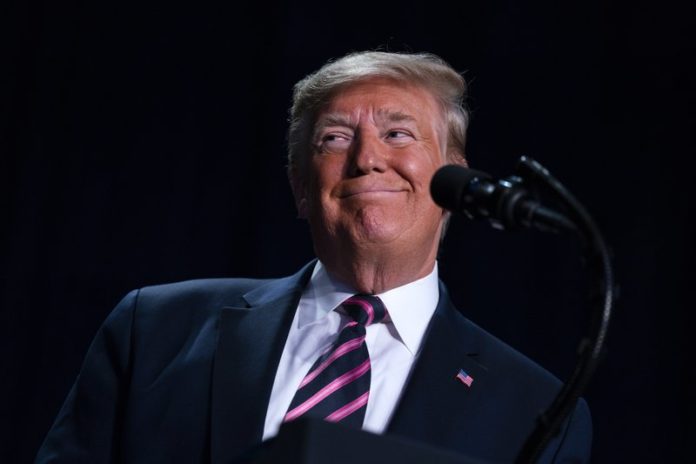 Dispatching Cabinet secretaries across the country to woo Iowa voters. Using private cash to finance an official made-for-TV moment. Delivering a State of the Union address that doubled as a campaign kickoff speech. Holding an impeachment acquittal victory rally in the White House East Room.

President Donald Trump made clear this week that he has no qualms about using the powers of his office to court voters in an election year. As he emerges from the impeachment drama, claiming vindication, Trump appears all the more emboldened to blur the lines between public and private endeavors.

That mindset was on full display Thursday as he used the White House as the setting for a scorched-earth victory speech celebrating his acquittal by the Senate following his impeachment by the House. Just days earlier, Trump delivered a speech in front of a joint session of Congress that could have been mistaken for a low-key Trump rally, complete with partisan incantations from Republicans in the chamber of “Four more years!” Similar chants have rung out through various rooms of the White House as Trump has hosted events that took on sharply partisan tones.

“I get it — presidents use their last SOTU to make the case for re-election,” Sen. Chris Murphy, D-Conn., wrote on Twitter. “But that crossed a line.”

At one point in his address, Trump announced with an Oprah Winfrey-level of drama that Philadelphia fourth grader Janiyah Davis would be getting a scholarship, allowing her to bypass her local public school.

Addressing himself directly to the little girl, seated near first lady Melania Trump in the gallery, Trump said he could “proudly announce tonight that an Opportunity Scholarship has become available, it is going to you and you will soon be heading to the school of your choice!”

It turns out the money wasn’t coming from any pot of state or federal dollars.

Instead, it came from the personal accounts of Education Secretary Betsy DeVos. Elizabeth Hill, a Department of Education spokeswoman, told The Associated Press that DeVos, who donates her annual salary to charity, would be “directly providing the scholarship for Janiyah” and that the money would go directly to the school of her family’s choosing.

Hill declined to say how Davis had come to the department’s attention.

Donald Sherman, deputy director of the nonprofit government watchdog group Citizens for Responsibility and Ethics in Washington, said the arrangement “certainly could be unethical” and was “at minimum unseemly.”

It wasn’t the only time this week that Trump’s Cabinet secretaries took a detour into political efforts.

In the lead-up to the kickoff Iowa presidential caucuses Feb. 3, Trump’s campaign flooded the state with more than 80 surrogates, including a long list of senior administration officials. Among those participating: DeVos, as well as the secretaries of commerce, interior, and housing and urban development, and the acting White House chief of staff.

The campaign chartered a 737 to ferry the governmental pep squad to and from Washington.

Under federal law, civilian employees in the executive branch cannot use their titles when doing political work, so announcements about the events referred to Cabinet officials without their titles. They are also prohibited from taking part in any partisan activity while on the clock. The president and vice president are exempt from the rules.

Next week, the campaign will again be deploying top surrogates — this time to polling locations across New Hampshire, which votes Tuesday.

It’s a familiar tactic for presidents — Republicans and Democrats alike.

President Barack Obama, for instance, allowed five members of his Cabinet to address the party’s 2012 convention in Charlotte, North Carolina, as he sought reelection. But four years later, as his former secretary of state, Hillary Clinton, sought the White House, Obama decided to prohibit Cabinet members from taking part as he sought to separate his administration from the politics of the moment.

Obama was also accused of using other levers of the federal government to bolster his 2012 reelection chances when he took executive action to protect “Dreamer” immigrants who came to the country illegally as children. In 2012, Kathleen Sebelius, Obama’s health and human services secretary, was also cited for violating federal law prohibiting Cabinet members from engaging in politics on the clock when she called for the president’s reelection and touted the candidacy of another Democrat at an event she was attending in her official capacity.

Trump, for his part, has repeatedly stepped over the line.

The independent government watchdog Office of Special Counsel has cited the president’s top advisers on multiple occasions for violating the Hatch Act, which bars federal employees from engaging in certain political activities, including playing “any active part” in a campaign.

In November 2018, the watchdog found six White House officials in violation for tweeting or retweeting the president’s 2016 campaign slogan “Make America Great Again” from their official Twitter accounts. Most notably, the office recommended in June 2019 that White House counselor Kellyanne Conway be fired.

Trump refused to take action against Conway, suggesting that the office was trying to take away her right to free speech.

Trump’s policy actions that further his political aims also have raised eyebrows, though it’s a murky area, and all presidents advance causes that are in sync with their political aims.

In the lead-up to the 2018 midterm elections, as Trump was trying to energize his base voters and stanch Republican losses, the president issued dire warnings from the Oval Office about an “invasion” of migrants and deployed the U.S. military to the southern border in what many saw as a political stunt.

More than a year ago, his administration recognized Venezuelan opposition leader Juan Guaidó as the nation’s legitimate president and called on socialist leader Nicolás Maduro to resign. Trump invited Guaidó to attend the State of the Union as a special guest and dedicated a moment in the address to pledging solidarity with the leader.

Susan MacManus, a political scientist at the University of South Florida, saw Trump’s shout-out to Guaidó as one of several carefully calibrated moments in the speech aimed at courting a specific voting bloc.

While all presidents pepper the annual address with lines that highlight groups or individuals who are important to their electoral chances, MacManus said, Trump took it to another level with a speech full of moments aimed at various blocs of voters, including African Americans, military families and conservatives.

“This was a classic example of micro-targeting of people that he thinks he needs,” MacManus said.