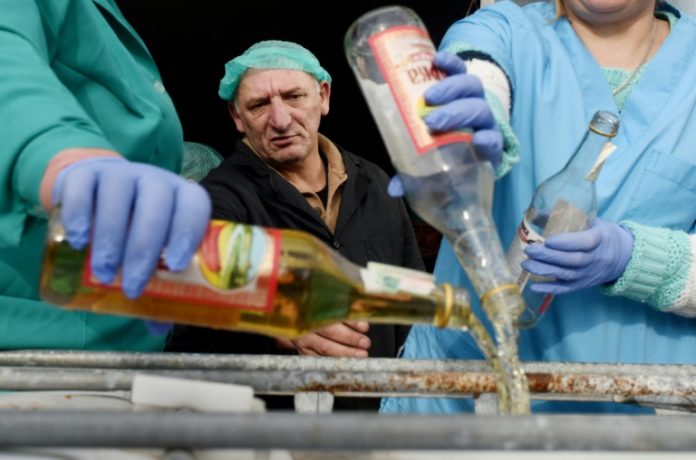 Ukrainian authorities began the task of destroying 37,000 bottles of illicit adulterated vodka on Wednesday, a national “record” in a country where consumption of illegal alcohol regularly poisons and even kills.

Minister of Justice Denys Malyuska launched the operation in the city of Vynnyky in the central Lviv region where the bottles, holding 14 tonnes of alcohol, have been stored since their seizure in 2014.

“It is difficult to say what is in there but consumption is strictly not recommended,” said the minister.

“This adulterated alcohol poses a huge threat to people’s health and their lives.”

In front of the media, the contents of several bottles were poured into plastic tanks or blue dye was added, to rule out any illegal re-sale of the beverage.

The procedure should last about a week, after which the liquid will be poured into the sewers at a secret location, according to the minister.

“This is the first time this procedure has been used so that everyone can see that the alcohol that has been seized is really destroyed,” said Maliouska.

The minister said that in the past there had been “complaints” from the business community that because of corruption within the police, the illicit alcohol had often turned up in shops after being seized.

Cases of poisoning from adulterated drinks are a regular occurence in Ukraine, where the consumption of alcohol, especially spirits, remains high. And they are often fatal.

In 2016, 73 people died from a total of 150 people who were poisoned by adulterated alcohol.

The following year, six poisoning cases killed three people and, according to Ukrainian media, ten poisonings recorded by the authorities in 2018 led to nine deaths.

The tax department of the Lviv region told AFP on Wednesday that the most adulterated alcohol was vodka, which is then sold in shops in small towns or cafes located along the roads.