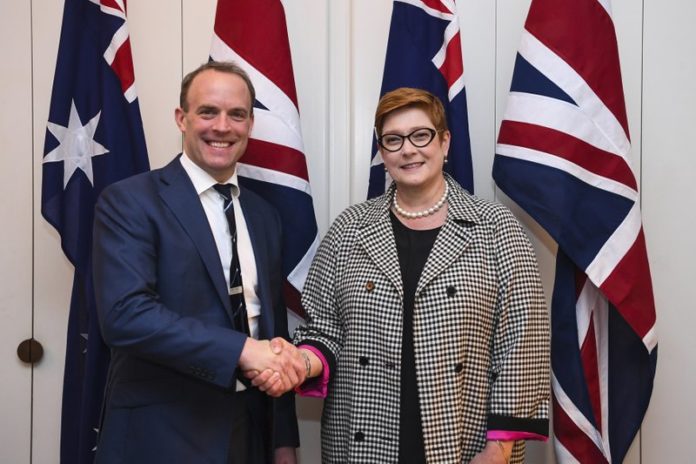 British Foreign Secretary Dominic Raab made his first overseas trip since Brexit on Thursday to faraway Australia, where he reaffirmed Britain’s desire for a free trade deal and gave assurances that the countries’ differing views on Chinese tech giant Huawei would not stand in the way of closer relations.

Raab’s first stop was the capital Canberra on a trip that will also take him to Japan as well as former British colonies Malaysia and Singapore.

Both Raab and Australian Foreign Minister Marise Payne reaffirmed their commitment to start negotiations on a bilateral free trade deal as soon as possible. They also agreed to find opportunities for engagement in the Indo-Pacific region.

“We’ve recommitted today to launching negotiations on an ambitious free trade agreement between our countries as soon possible,” Raab said.

“Australia would hopefully be part of that first wave of high-priority deals that we’re pursuing,” he added.

Britain’s decision is the first by a major U.S. ally in Europe, and follows intense lobbying from the Trump administration as the U.S. vies with China for technological dominance.

Australia angered China, it biggest trading partner, by banning Huawei on security grounds from involvement in its national broadband network and the rollout of new 5G networks.

Raab assured Payne that Britain’s decision would not affect its intelligence-sharing relationship with Australia, the United States, Canada and New Zealand, which form the Five Eyes partnership.

“We were absolutely clear and looked at it very clearly and there is nothing in the decision that we took that would inhibit or disrupt in any way whatsoever the Five Eyes intelligence sharing and there‘s nothing in the approach that we are taking that would have an impact on, for example, the sharing of sensitive data,” Raab said.

Payne said she was confident Australia could strike a free trade deal with Britain.

“We are … at opposite ends of the world, yet we are very ready and able to grab a new era of opportunity for enhanced strategic and economic cooperation,” Payne said.

“We also look forward to an early, comprehensive and ambitious free trade agreement because we both believe in rules-based markets for trade and investment,” she added.

Australia also accepted Britain’s offer for cooperation between the countries’ space agencies so that high-resolution satellite imaging could help Australia prepare and respond to wildfires.

An unprecedented wildfire season has killed at least 33 people and destroyed more than 3,000 homes since September.