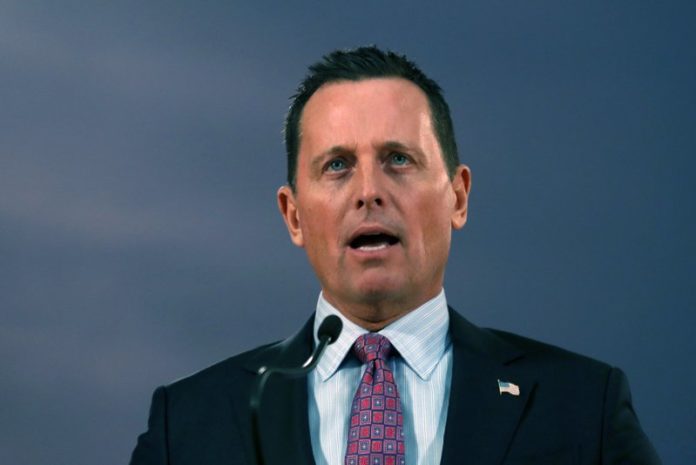 President Donald Trump on Wednesday named Richard Grenell, the U.S. ambassador to Germany, as acting director of national intelligence, putting a staunch ally in charge of the nation’s 17 spy agencies.

The move drew immediate criticism from Democrats who said the job should be held by someone with deep intelligence experience. It also puts a Trump loyalist in charge of an intelligence community that the president has routinely disparaged and ignored, notably in the context of Russian interference in the 2016 election.

Grenell, who prefers the nickname “Ric,” served for two years as the top U.S. envoy to Germany and before that as the spokesman for the U.S. Mission to the United Nations during most of President George W. Bush’s eight years in office. But immediately before taking the ambassador’s post in Berlin, Grenell was known mainly as an online media critic and conservative Fox News foreign policy analyst.

“Rick has represented our Country exceedingly well and I look forward to working with him,” Trump tweeted.

Trump has been consolidating his administration’s senior ranks with ardent supporters following his acquittal by the Senate on impeachment charges related to withholding aid to Ukraine in exchange for an investigation into his political rival Joe Biden.

Since Trump’s acquittal, he has removed at least two witnesses who testified in the impeachment inquiry, National Security Council staffer Alexander Vindman and U.S. Ambassador to the European Union Gordon Sondland. And, earlier Wednesday, he demanded and got the resignation of the senior Pentagon official who had signed off on the Ukraine assistance, Under Secretary of Defense John Rood.

Grenell replaces Joseph Maguire, who has been acting national intelligence director since August. It was unclear if Maguire would return to the National Counterterrorism Center; Trump left open the possibility that he could get another job in the administration.

Trump named Grenell as acting national intelligence director, meaning he would not have to be confirmed by the Senate. As the Senate-confirmed ambassador to Germany, Grenell is eligible to take over the intelligence portfolio on an acting basis.

An administration official, who was not authorized to discuss the appointment and spoke only on condition of anonymity, said Grenell was named in an acting capacity because Trump wanted him in quickly and there were doubts about whether he could be confirmed in the job.

Sen. Mark Warner of Virginia, the ranking Democrat on the Senate Intelligence Committee, said Trump had “selected an individual without any intelligence experience to serve as the leader of the nation’s intelligence community in an acting capacity.”

Warner accused the president of trying to sidestep the Senate’s constitutional authority to advise and consent on critical national security positions.

“The intelligence community deserves stability and an experienced individual to lead them in a time of massive national and global security challenges,” Warner said in a statement. “… Now more than ever our country needs a Senate-confirmed intelligence director who will provide the best intelligence and analysis, regardless of whether or not it’s expedient for the president who has appointed him.”

Susan Hennessey, a fellow in national security law at Brookings Institution and a former attorney at the National Security Agency, tweeted: “This should frighten you. Not just brazen politicization of intelligence, but also someone who is utterly incompetent in an important security role. The guardrails are gone.”

However, at least some GOP hawks are prepared to support Grenell’s appointment, according to one Senate staffer, who said this included Republican Sens. Tom Cotton, Ted Cruz, Lindsey Graham and Marco Rubio.

In his current role, Grenell has angered numerous German officials and politicians with his blunt and often abrasive manner, particularly on Twitter, where he has repeatedly called out Germany for not following the Trump administration’s lead on issues ranging from Iran to NATO and information technology.

Grenell has publicly criticized his German hosts for their defense spending not yet meeting a NATO member minimum pledge of 2% of GDP, Berlin’s support for the Russia-to-Germany Nord Stream 2 gas pipeline despite major U.S. objections, and its continued consideration of allowing the Chinese communications giant Huawei to participate in the development of its 5G internet networks.

Just last weekend, Grenell tweeted that Trump had called him from Air Force One to instruct him to warn European nations of possible retaliation, including the cutting of intelligence cooperation, if they allowed Huawei to participate in their next generation communications networks.

However, Grenell has not been without some diplomatic accomplishments. He has helped in recent months to engineer a rapprochement between Serbia and Kosovo, brokering transportation deals that could see the resumption of direct flights, rail service and new roads between the rival neighbors split apart after the disintegration of the former Yugoslavia. And, perhaps of more domestic political interest to Trump ahead of the November election, Grenell has championed the LGBTQ cause: spearheading an informal yet administration-approved campaign to press other nations to recognize and respect gay rights.

At the United Nation, as the longest-serving spokesman for the U.S. Mission, Grenell served under former Ambassador John Bolton, Trump’s erstwhile national security adviser, and Zalmay Khalilzad, the current special envoy for Afghanistan. He also served in that post under former U.N. Ambassador John Negroponte, who became the first director of national intelligence when the office was created in the wake of the Sept. 11, 2001, terrorist attacks.

Grenell also briefly served as a foreign policy adviser to Mitt Romney’s failed 2012 presidential campaign before leaving amid allegations that he was forced out because his sexuality was problematic to supporters. In the early days of the Trump administration, Grenell was considered for the job as U.S. ambassador to NATO but was never nominated due to objections from then-Secretary of State Rex Tillerson.