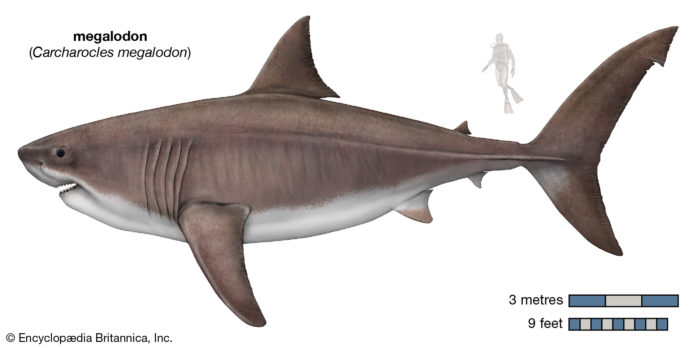 The Megalodon (Otodus megalodon, previously Carcharodon or Carcharocles Megalodon) is an extinct species of Shark, that was the largest to ever prowl the oceans. The name means “large tooth” and rightly so, because the majestic creature has been measured to be a whopping 48 to 60 feet (15 to 18 meters). For 13 Million years, the Meg was the prime predator of the global marine ecosystem. Interestingly, this shark is also famous for being the inspiration for the menacing shark in the movie “The Meg (2018)”.

This shark went extinct toward the end of the Pliocene Epoch (around 3.5-2.6 million years ago), as global temperatures began to cool drastically. It was a time when a period of cooling and drying resulted in the expansion of Savannahs and other Grasslands, which eventually led to the long-legged grazers that live there today. According to a study published in PeerJ, the Megalodon suffered extinction 3.6 million years ago and not 2.6 million years ago as previously assumed. Strangely, this later date does not coincide with any major events or shifts that could explain their disappearance. It may have taken place at a time of “faunal turnover,” when several species went extinct as other species started to emerge. While the exact trigger for the extinction of Megalodons is not known, some scientists hypothesise that their demise may have been due to a survival based competitor – the Great White Shark. This novel yet majestic species of shark first appeared on the fossil record around 6 million years ago. According to scientists, there may have been a short overlap before the Great White outcompeted the Megalodon.

Very recently, a researcher stumbled upon a giant tooth from this species in the Cayman Islands, in the sand at a development site in the eastern districts, during an R&D project.

The finder gave the tooth to the Department of Environment, Caymans for further study. The DoE announced this prehistoric discovery on social media, after it was handed in. The tooth is a little over 4 inches (10.25 centimetres) long. Drawing a comparison between the Megalodon and other majestic sharks that exist in the marine world today, the DOE said “That’s three times longer than an adult great white shark and about six times longer than the biggest Caribbean reef shark.”

The Natural History Museum in London has mentioned that some of the oldest fossils they store, are around 20 million years old.

The largest Megalodon teeth ever found measure up to 7 inches (18 centimeters), making the one recently discovered in the Cayman Islands relatively small in comparison. There have been a few Megalodon teeth discoveries over the last year, including one in North Carolina and one in Mexico. These teeth would have been the prime choice to pierce meat – experts believe Megalodons would have preyed on large fish and shockingly, even whales as large as Humpbacks.