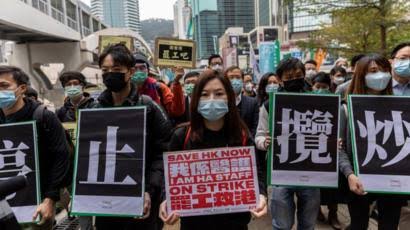 The Latest on a virus outbreak that began in China (all times local):

A Hong Kong medical union has warned that its 20,000 members could resign en masse if the semi-autonomous territory’s Hospital Authority refuses to hold a dialogue with them over their demands amid an ongoing strike.

Thousands of union members have been on strike since Monday demanding that Hong Kong authorities completely close the border with mainland China to stem the spread of the new coronavirus and ensure a safe working environment including sufficient protective gear for staff.

Hong Kong is struggling to curb the spread of the virus after reporting 21 cases, including local transmission. The strike has hurt emergency and medical services but the government has refused to completely seal the border.

Two border checkpoints with China remain open. The government said Wednesday that it will quarantine all arrivals from China for two weeks starting on Saturday, a move the medical union chief Winnie Yu says will only further burden the city’s medical system.