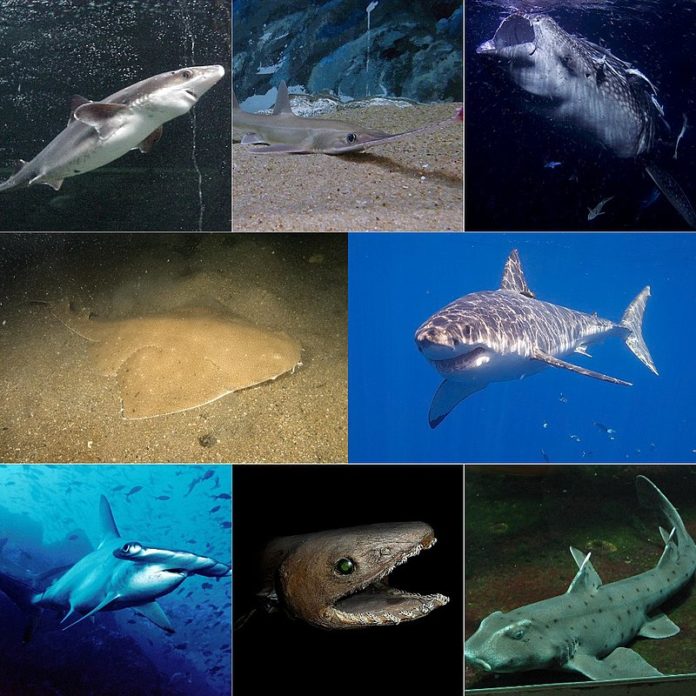 Wikipedia says, Sharks are a group of elasmobranch fish characterized by a cartilaginous skeleton, five to seven gill slits on the sides of the head, and pectoral fins that are not fused to the head. Modern sharks are classified within the clade Selachimorpha (or Selachii) and are the sister group to the rays.

Are they the hunters, or the ones being hunted? Few people realise that well over 100 million sharks die every year at the hands of humanity. This is largely as a result of the market for shark’s fins. Millions of others die as by-catch in nets intended for other species. These sharks are often tossed overboard as trash.

By comparison, there are usually fewer than 10 fatal shark attacks on humans recorded in an average year.

Surprised? Don’t be. Sharks are widely misrepresented, and misunderstood. Read on. We have 10 shark facts that we’re willing to bet you didn’t know. Let’s separate some of the fiction from the facts…

1. Sharks are Older Than You Think…

Over 450 million years of evolution has refined shark species to be perfectly suited to the various aquatic environments in which they are found. Compare that to human history. The cave dwellers from which we descended only got up on two legs around 6 million years ago.

Compared to the now extinct Megalodon, the Great White is a pussy cat. The largest shark that ever existed, they could grow up to 30 metres in length. A grown man could easily have stood up inside the open mouth of an adult Megalodon.

Sadly, the majestic Great White shark is still consider a mindless, murderous, killing machine by many people. There was a time not so long ago when humanity also feared predators at the top of the food chain that walked on land. Tigers, lions, polar bears were all slaughtered without a thought as to the effect that this would have on the ecosystems of which they were (and are) an important part. Slowly, they are becoming protected, instead of executed.

When a Great White takes a bite out of a swimmer, surfer, or his board, it is often a case of mistaken identity. Seen from below, a surfer on a board can look an awful lot like a big, fat, tasty seal. Great Whites are so highly evolved that when they bite into their prey, they get a sense for how much body fat the creature is carrying.

When they take a bite out of human, they often don’t bother to “finish the job”. We’re rather bony, not fat-filled and juicy like the seals. So they spit us out. Unfortunately, we are left with a rather nasty wound, often miles from shore…

Even when sharks cannot see you… they can still sense you. As sharks evolved they developed a “sixth sense”. Ampullae of Lorenzi may sound like an exotic Italian dish. It’s not. They are the receptors which sharks use to sense electromagnetic signals that go unnoticed by humans and other species.

It is said that sharks can “feel” how fast your heart is beating as they swim past you. Hammerheads have been observed hunting rays buried beneath the sand, using their ability to sense where their next potential meal hides. Once they have pinpointed the location, they (literally) nail down the ray beneath the sand using the two pronged hammer that is their head. Incapacitated, the unfortunate ray becomes lunch.

As they say, you can run, but you can’t hide… at least not from a hungry hammerhead!

OK, not 100% true, but almost. Scientists have forced sharks to ingest known carcinogens and injected them with deadly toxins. Yet still there are fewer than 10 verified reports of sharks that developed malignant tumours. Humanity has much to gain by studying these fascinating fish, as opposed to slaughtering them.

If you have a cat you know how much hair they can shed. A similar phenomenon can be observed in many shark species. It is not surprising that they lose teeth while feeding or as they age. What is unusual is that they have the ability to grow more.

Bull sharks are one species of shark that has developed the ability to regulate the amount of water in their bodies, regardless of how much, or little, salt is in their aquatic environment. That means they can enter rivers, and even swim upstream into lakes in the search for food. Lake Nicaragua, and the Zambezi River in Africa are two spots where sharks are frequently reported quite comfortably cruising by.

A shark’s sense of smell goes beyond anything we humans can imagine. Some species can sense blood in the water at a concentration of one part per 10 billion. That means a person with even an open scratch would be detected by any shark within a very wide radius, very quickly. Sharks can be found in pretty much every oceanic environment on earth. So can people. Swimming, fishing or diving. Yet there are relatively very few attacks on people.

Mindless, indiscriminate killers? I think not.

While a diver using a re-breather unit is relatively silent, conventional scuba gear is loud and noisy to those who live in the underwater world. This is part of the reason why it can be so difficult to spot and photograph sharks. To them, we sound like a truck roaring by, with our bubbles and noisy breathing.

That depends. Tiger Sharks have earned themselves an especially infamous reputation as “opportunistic” feeders. Tires, baby whales, shoes and sailors. You name it, chances are it’s been found in the tummy of a Tiger.

That said, the gentle giants of the sea, and the biggest fish on earth are the Whale Sharks. They have no teeth. Being filter feeders, they strain plankton from the sea as they swim. They are gorgeous creatures who will tolerate snorkelers and (sometimes) divers swimming alongside them. Sadly, they are now endangered in many places where they once swam in healthy numbers.

Large sharks, like any wild animal that is a top predator and a carnivore, should be shown a healthy degree of respect. Especially when we divers suit up, take the leap into the sea, and essentially drop in (uninvited) to their homes. If a group of tigers fell through my roof unannounced, and proceeded to follow me around my house, it would make me a little nervous too.

Essentially, this is what we do when we enter the ocean. Sharks, like the earth’s other creatures, are not looking for a fight. They will obviously defend themselves if they are cornered or feel threatened. Show sharks the respect they deserve, and it is very likely that they will return the favour.

In 2014, 33,000 Americans were injured in some way due to their use of toilets. Sharks were responsible for a whopping 13 injuries. Just putting it out there…