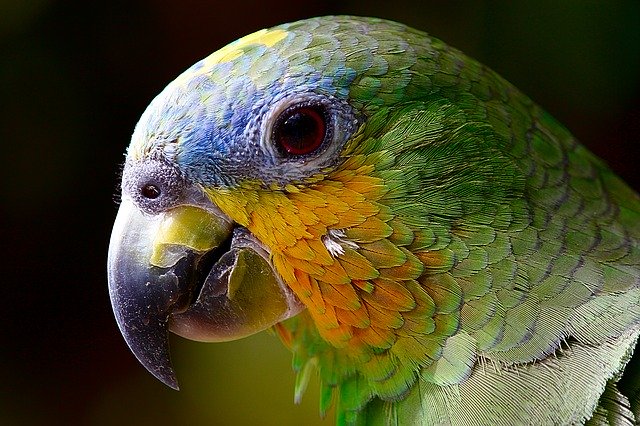 Talking birds are birds that can mimic the speech of humans. There is debate within the scientific community over whether some talking parrots also have some cognitive understanding of the language. Birds have varying degrees of talking ability: some, like the corvids, are able to mimic only a few words and phrases, while some budgerigars have been observed to have a vocabulary of almost 2,000 words. The hill myna, a common pet, is well known for its talking ability and its relative, the European starling, is also adept at mimicry. Wild cockatoos in Australia have been reported to have learned human speech by cultural transmission from ex-captive birds that have integrated into the flock.

The earliest reference to a talking bird comes from Ctesias in the 5th century BC. The bird which he called Bittacus may have been a plum-headed parakeet.

The young of some birds learn to communicate vocally by social learning, imitating their parents, as well as the dominant birds of their flock. Lacking vocal cords, birds are thought to make tones and sounds using throat muscles and membranes – the syrinx in particular. There are likely to be limitations on the sounds that birds can mimic due to differences in anatomical structures, such as their lacking lips. However, it has been suggested that mimicry amongst birds is almost ubiquitous and it is likely that eventually, all species will be shown to be able to have some ability to mimic extra-specific sounds (but not necessarily human speech).

Songbirds and parrots are the two groups of birds able to learn and mimic human speech. However, it has been found that the mynah bird, part of the starling family, can also be conditioned to learn and create human speech. Pet birds can be taught to speak by their owners by mimicking their voice. If then introduced to wild birds, the wild birds may also mimic the new sounds. This phenomenon has been observed in public parks in Sydney, Australia, where wild parrots utter phrases such as “Hello darling!” and “What’s happening?

Several theories have been proposed regarding the function of audible mimicry in general; however, these do not make a specific theory regarding why human speech is mimicked. Several of the theories will apply to only some species due to social structure, habitat and behavioural ecology.

It has been suggested that (general) mimicry of non-bird related sounds is in fact, simply a mistaken attempt to copy species-specific calls. In the wild, flocks of parrots develop distinct local dialects. Research indicates they use these to distinguish familiar members of their flock from unfamiliar birds of other flocks. Birds respond more to vocalisations that are familiar to their own, and they ostracise individuals that vocalise in a different way. Birds raised in captivity might mimic humans, particularly their owners, to gain acceptance as a member of the family (flock). If they hear a word or phrase repeatedly, they might interpret that as a vocalisation distinct to their flock. They then attempt to make the vocalisation themselves to maintain their membership of that flock. If the parrot gets no response when it squawks a natural parrot vocalisation, but receives attention or food when it mimics human speech, it has an extra incentive to repeat human words and phrases.

There is controversy about whether parrots are capable of using language, or merely mimic what they hear. However, some scientific studies—for example those conducted over a 30-year period by Irene Pepperberg with a grey named Alex and other parrots, covered in stories on network television on numerous occasions—have suggested that these parrots are capable of using words meaningfully in linguistic tasks.

Some in the scientific community are skeptical of Pepperberg’s findings, pointing to Alex’s communications as operant conditioning. Critics point to the case of Clever Hans, a horse whose owner claimed could count, but who instead was actually understanding subtle cues from him. In another case, Nim Chimpsky, a chimpanzee, was thought to be using language, but there is some debate over whether he simply imitated his teacher. Dr. Herbert Terrace, who worked with Nim Chimpsky, says he thinks Alex performed by rote rather than using language; he calls Alex’s responses “a complex discriminating performance”, adding that in every situation, “there is an external stimulus that guides his response.”  However, supporters of Alex mention that Alex was able to talk to and perform for anyone involved in the project as well as complete strangers who recorded findings unassisted and during first contact with the bird, making the arguments of rote learning and operant conditioning difficult to substantiate.

Scientists in France and the Czech Republic have also had some success in teaching grey parrots to label items referentially using human language, albeit using a different teaching methodology to that of Pepperberg — which was found to be ineffective in the case of the particular birds within the study.