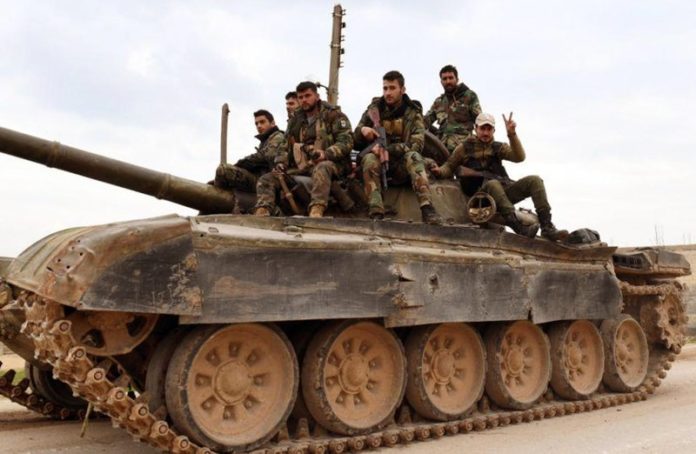 The push by President Bashar Assad’s forces into towns and villages in the northwestern Idlib province has caused the displacement of more than a half million people in just over two months, compounding a humanitarian disaster in the region packed with internally displaced people. It has also angered Turkey and risked a military confrontation between Turkish and Syrian troops.

The town of Saraqeb, near the Turkish border, has been at the center of intense fighting for days. Opposition fighters pushed out government soldiers who entered it Wednesday, while Turkey sent in new reinforcements Thursday and threatened to use force to compel the Syrian forces to retreat by the end of the month.

The town sits at the intersection of two major highways, one linking the capital Damascus to the north and another connecting the country’s west and east.

State news agency SANA and state-run Al-Ikhbariya TV said Syrian army units entered the town before nightfall and were combing it for remaining fighters and explosives.

The Syrian army had earlier besieged the town and at least four Turkish military posts set up to protect Saraqeb against the advance were also besieged.

The Britain-based Syrian Observatory for Human Rights, an opposition war monitoring group, said army units entered Saraqeb but had not yet taken control.

Video taken by The Associated Press showed rebel fighters lobbing shells at government troops from around the town of Binnish, northwest of Saraqeb. Fighters stacked artillery shells and burned tires.

“Today, we are burning tires for the war that’s hitting the town of Binnish,” said one unidentified fighter, pledging to defeat anyone who tried to advance on the town. “Let them come here and we will stomp on their head one after another,” he added.

The government advance came after a rare confrontation between Turkey and Syria forces Monday that killed seven Turkish soldiers and a Turkish civilian member of the military, as well as 13 Syrian soldiers.

In Moscow, Russia’s Foreign Ministry announced Thursday that Russian soldiers had been killed in a northern Syrian province alongside Turkish servicemen, without saying when the incident occurred or how many were killed. The ministry blamed “terrorists” for the deaths.

Russia is a main backer of Assad’s forces, while Turkey supports insurgents fighting his government.

Syrian troops have been advancing since December into the country’s last rebel stronghold, which spans Idlib province and parts of nearby Aleppo. Turkish troops are deployed in some of those rebel-held areas to monitor an earlier cease-fire that has since collapsed.

The Syrian offensive to retake the rebel held areas in the northwest has led to a humanitarian crisis, with more than 580,000 civilians fleeing their homes since the beginning of December, according to the U.N. Many of them have sought safety in areas close to the border with Turkey. At least 53 health facilities have suspended work in the area, according to the World Health Organization.

Idlib province is home to some 3 million people, many of them displaced from other parts of Syria in earlier bouts of violence.

The European Union called Thursday for an end to the fighting and urged warring factions to allow aid workers and supplies into the area.

“Bombings and other attacks on civilians in north-west Syria must stop,” EU foreign policy chief Josep Borrell and the bloc’s Crisis Management Commissioner Janez Lenarcic said in a statement.

They said the EU, a major aid donor, would continue to provide help but that “unimpeded, safe and secure access” was required.

The Observatory said Syrian warplanes on Thursday attacked a military air base in the village of Taftanaz, where Turkish troops deployed recently.

The Observatory said Syrian rebels later launched an attack under the cover of intense Turkish artillery shelling on the village of Nairab, which Syrian troops captured earlier in the week.

The insurgents carried out at least one suicide attack with an armored personnel carrier rigged with explosives, according to citizen journalist Taher al-Omar, who is embedded with the militants on the edge of the village.

Turkish leaders have repeatedly called on Russia to “rein in” Syrian government forces.

Kremlin spokesman Dmitry Peskov responded Thursday that Russia was concerned about the concentration of insurgent groups in Idlib and their “continuing activity. ”

Peskov said the Kremlin doesn’t rule out a meeting between Russian President Vladimir Putin and his Turkish counterpart, Recep Tayyip Erdogan, to discuss the situation in Syria.

Meanwhile, Turkish Foreign Minister Mevlut Cavusoglu said a delegation from Russia would arrive in Turkey soon for talks on the situation following the attack on Turkish soldiers. He said a follow-up meeting between Erdogan and Putin could also take place “if there is a need.”