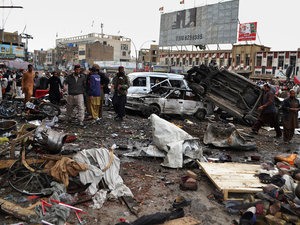 At least 10 people were killed in a suicide blast that targeted a police vehicle in southwestern Pakistan on Monday, officials said.

Two police personnel were among those killed in the blast in the city of Quetta, the capital of Balochistan province, which borders Afghanistan and Iran.

“We have received 10 bodies so far and 35 injured in Civil Hospital,” a hospital official told Reuters.

Two police personnel were among the dead, a senior police official confirmed.