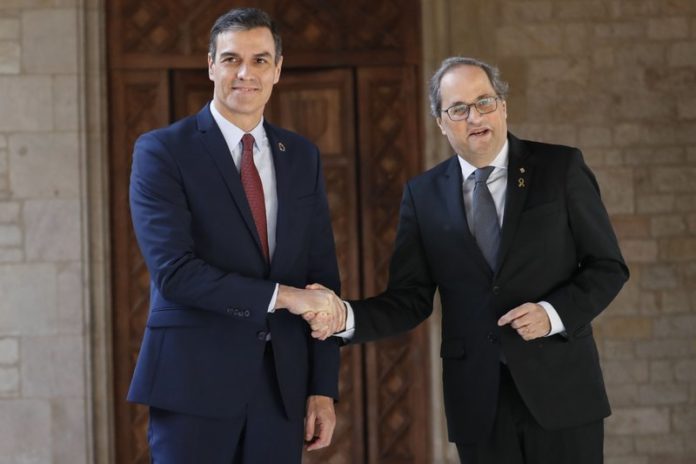 The Spanish government and the regional leaders of Catalonia will start holding formal talks this month in a bid to end one of the country’s biggest crises since the return of democracy in the late 1970s.

Prime Minister Pedro Sánchez made the announcement Thursday shortly after meeting with the separatist leader of the northeastern region, Quim Torra, at the Catalan government seat in downtown Barcelona. As expected, no major breakthrough came from the meeting on the divisive issue of Catalonia’s independence from the rest of Spain.

“What I propose is that we need to start over,” Sánchez told journalists after the meeting. “To restart the dialogue at the point where our paths diverged … I have come here to talk. I appreciate the tone and the willingness of President Torra. It was a respectful conversation between two presidents.”

Torra said later that he had insisted that Sánchez allow a legal referendum on secession for the wealthy region.

Sánchez’s government has repeatedly said a referendum is out of the question since it would violate the Spanish Constitution. Sánchez tried to steer the talks towards social issues, financing for Spain’s regions and the impact of recent storms in the east of the country.

“The Spanish government has not budged on its position regarding (Catalonia’s) self-determination,” Torra said afterward.

“If this marks the start of a new era, we will see. We still don’t know what the Spanish government would propose.”

Last month, Sánchez agreed to open talks between his government and the Catalan government as part of a deal to win the support of some separatist lawmakers in the Spanish Parliament that he needed to form a government. Thursday’s meeting with Torra was not considered part of that negotiation.

The two leaders appeared to chat amiably as they walked up an ornate stone staircase in the inner patio of the medieval Palace of the Generalitat, which is home to the Catalan government. Once inside the meeting room, Torra gave Sánchez two books on human rights.

The building was under extra police protection, but there were only a handful of protesters outside the building, in stark comparison to the last time Sánchez met with Torra in December 2018. The day before that meeting, protesters clashed violently with police while Sánchez held a meeting of his Cabinet in Barcelona.

Any significant outcome of this new meeting is also in question as Torra’s future as the leader of Catalonia is in serious doubt.

Torra was stripped of his seat in the regional parliament last month after a Catalan court barred him from public office for 18 months for disobedience. Torra has appealed the decision to Spain’s Supreme Court and is clinging to his presidency in the meantime.

Torra also recently announced that he will call a snap election as soon as the Catalan parliament can pass a budget because of the strained relations with the other separatist party that forms part of his coalition government.

Catalonia’s separatist movement in disarray. Nine of its leaders are serving prison sentences for holding an unauthorized secession referendum and attempting secession in 2017. Other leaders fled the country.