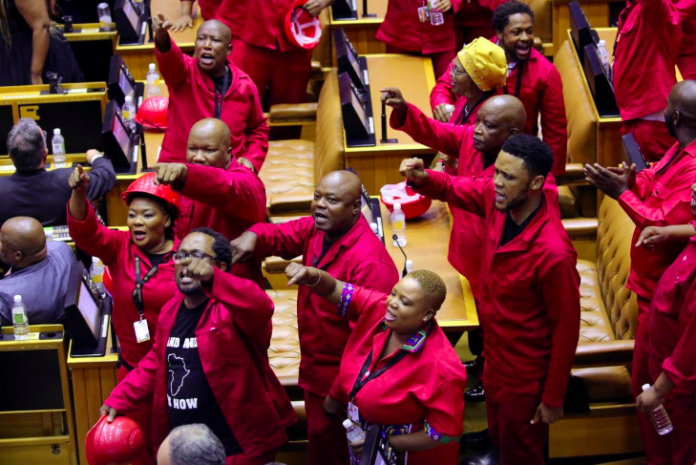 Ramaphosa acknowledged in an annual address to parliament that growth had stalled, exacerbating high levels of unemployment and increasing hardship for millions of citizens.

But the speech was short on specifics or timeframes that would have reassured investors that his government had a clear plan to solve the deep-seated structural problems in Africa’s most industrialized economy.

“Low levels of growth mean we are not generating enough revenue to meet our expenses, our debt is heading towards unsustainable levels, and spending is misdirected,” Ramaphosa said.

“We cannot continue along this path. Nor can we afford to stand still.”

Ramaphosa came to power two years ago with pledges to lift growth and improve governance, after a decade of policy missteps and corruption scandals under his predecessor Jacob Zuma.

But he has found it hard to revive investor confidence given severe power cuts, repeated bailouts to ailing state firms and infighting in his governing African National Congress party.

Initial euphoria around Ramaphosa’s appointment has given way to frustration in some business circles. Ramaphosa’s critics want him to move more swiftly to address regulatory blockages.

Ramaphosa said on Thursday that government had met trade unions on ways to contain the public sector wage bill – a key worry for ratings agencies – but did not elaborate.

He said South Africa would set up a sovereign wealth fund to protect its endowments and a state bank to broaden access to financial services.

Analysts have reacted skeptically in the past to the idea of South Africa establishing a sovereign fund, since it does not have large oil and gas revenues that could be easily harnessed.

The country’s mining sector is in decline and is controlled by private companies.

His speech was delayed for more than an hour by radical leftist party the Economic Freedom Fighters (EFF).

They interrupted Ramaphosa when he took the podium, calling on him to fire Public Enterprises Minister Pravin Gordhan for his handling of Eskom and South African Airways.