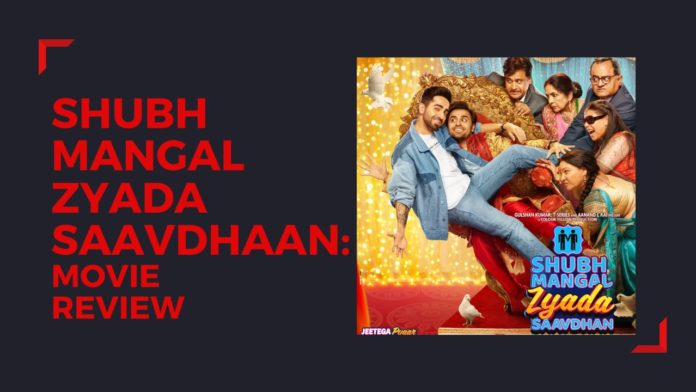 Honestly I went to the theatre for a 9 a.m. show after a very long time and with a very a high expectation-  Ayushman Khurana and his recent  content driven (say taboo-breakers) entertainers have become so relevant (and successful) these days that it is very difficult to ignore him and the magic he brings on screen. Especially with films like Andhadhun, Bala and Article 15, Ayushmann Khurrana has got much critical acclaim and at the same time made a big green tick mark on the box-office.  When Shubh Mangal Zyada Saavdhaan (a sequel to 2017’s critical hit Shubh Mangal Saavdhaan) was announced last year I, as an audience ,was filled with ecstasy because it was for the first time that a homosexual love story was about to be explored on big screen and the makers constantly emphasized that the film does not show homosexuals in cliched manner. But is having a bold subject enough? Yes, the film is a homosexual love story and not cliched, but does it guarantee entertainment?  No, not always!

Shubh Mangal Zyada Saavdhaan looks good on paper but as a film it is so weak and boring that the idea to normalise homosexuality gets somewhere diluted and the messaging gets lost. Film begins with a happy gay couple (played by Ayushmann Khurrana and TVF’s star Jitendra Kumar) hurriedly running to catch a train in a superhero suit. The love between them is hinted by the way they hold hands. One of them is a full flamboyant while the other is modest and conserved. Few hurried sequences later (which includes an unnecessary cameo by Bhumi Pednekar) they are caught making out in a train and what follows next is a tale so insipid that it can be summed up as Taarak Mehta meets The Kapil Sharma Show.

The director, in an attempt to keep things light and breezy, enters slapstick territory. Not that I have any issues with slapstick comedies but it becomes very irritating when directors start spoon feeding everything. Film starts on a very good note and there are good comic sequences in the beginning but later on (especially in the second half) the film becomes so bizarre and boring that I started scratching my head. One of the major problems with this film is the chemistry between the leads. It is implicated that the couple are in love but not for once we feel any rooting for the protagonists. No time is spent on developing the bonding and the emotional connect between the two and this is why things appear artificial. Also, the music is weird and loud for no particular reason.

The only saviour of this film are the supporting casts. The chemistry between Gajraj Rao and Neena Gupta is really amiable and most of the one-liners belong to them.

No doubt that Shubh Mangal Zyada Saavdhaan is brave and tries to do something that hasn’t been done before in Bollywood. Wish more time had been spent on writing a better plot than one with a black cauliflower.