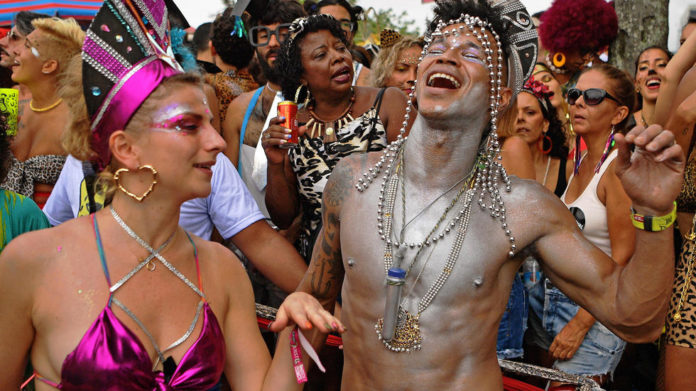 Vying for the title of carnival champions, the city’s 13 top samba schools will have one hour each to wow spectators and judges with elaborate shows flush with scantily clad dancers, small armies of drummers and floats built on seemingly impossible feats of engineering.

The event is shaping up to be especially political after a year under Bolsonaro, who has deeply divided Brazil with his attacks on just about every cause close to the carnival community’s heart: diversity, homosexuality, environmentalism, the arts.

Reigning champions Mangueira are planning a show about Jesus returning to Earth in one of Rio’s impoverished favela neighborhoods with “a black face, Indian blood and a woman’s body,” in the words of its central samba song.

That has already drawn backlash from a key group of Bolsonaro supporters: evangelical Christians, who sent Mangueira a petition calling the show “blasphemous.”

Mangueira entitled its show “The Truth Will Set You Free,” quoting — with a heavy dose of irony — a Bible verse often cited by Bolsonaro.

“In these times, when some are preaching a belligerent, intolerant and controlling Jesus, Mangueira is bringing back the Jesus of the gospel: loving, friendly, a companion of the oppressed and builder of peace,” said leftist theologian and Baptist pastor Henrique Vieira, who advised the samba school on its show.

The most successful school in the history of the contest, Portela, will pay tribute to Brazil’s indigenous Tupinamba people, who lived in Rio de Janeiro before the Portuguese colonizers arrived.

“Our community has no party or faction, it has no bishop and bows to no captain,” it says.

Those are likely references to Bolsonaro, a retired army captain, and Rio Mayor Marcelo Crivella, a fellow far-right politician, who is a bishop in one of Brazil’s biggest evangelical mega-churches.

Other schools have chosen themes such as the environment, fake news in Brazil’s 2018 presidential race, and black and women’s rights.

Crivella has openly criticized the city’s world-famous party since taking office in 2016, and steadily cut the 28 million reals ($6.4 million) in annual public funding the top samba schools used to receive.

This year, for the first time, the schools will get zero funds from the city.

That has only added fuel to the politically charged fire, says historian and carnival expert Luiz Antonio Simas.

“The samba schools have been plunged into a financial crisis… and so they have had to reinvent themselves,” he told AFP.

“That has fostered a generation of young directors… who have very interesting, progressive ideas on creating carnival shows that are at once art, party and politics.”

Often based in Rio de Janeiro’s poorest neighborhoods, the samba schools spend most of the year getting ready for carnival, with the help of thousands of workers and volunteers.

Some 70,000 spectators are expected at the “Sambadrome,” the massive avenue-turned-stadium where the groups parade, for a spectacle that starts at 9:30 pm each night and lasts until dawn.

Mangueira won last year’s contest with another politically charged show that spoke out against Brazil’s 1964-1985 military dictatorship. Bolsonaro, an army officer at the time, has often praised the military regime.