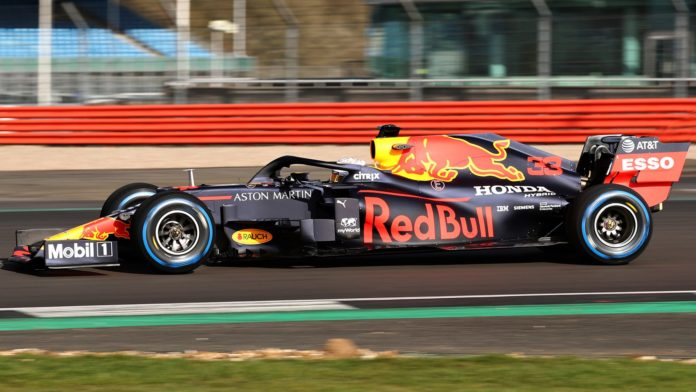 “IF YOU DON’T BELIEVE YOU CAN DO IT, IT’S BETTER TO STAY HOME”

Red Bull’s new car became the first of the 2020 F1 challengers to hit the track on Wednesday
when Max Verstappen got behind the wheel of the RB16 for a shakedown run at Silverstone, ahead of pre-season testing next week. Unlike last year, when its car was first showcased in a red camo livery, Red Bull has opted to display the RB16 in its traditional colours.

For three seasons in a row Red Bull have finished third in the championship. But with stability in the regulations and the end of what Team Principal Christian Horner called a “transitional year” with Honda in 2019, the RB16 could be
the car to deliver Red Bull a championship… or two. The car is decked out in the now-traditional Red Bull livery, with the team – and drivers Verstappen and Alex Albon – hoping that it can build on the success of its predecessor, which
Verstappen drove to three wins in Austria, Germany and Brazil, as well as the first two
pole positions of his career.

The RB16 will also be the second Red Bull to be powered by Honda, the Japanese power unit manufacturer having shown an impressive rate of development in the back of the Red Bulls (and Toro Rossos) last year, leading to the partnership being extended to the end of 2021.

Red Bull have popularised the high-rake car for the last decade, and it remains at the heart of their aerodynamic philosophy. It’s an approach capable of generating a lot of downforce, but it’s also less robust. Relying upon the airflow through the diffuser staying attached at big ride heights as the car slows down, it’s intrinsically a more delicate philosophy than the low-rake favoured by Mercedes. It was compromised significantly more by the 2019 simplification of the front wing, limitation of under-nose vanes and the banning of blown axles.

These features previously combined to create a powerful outwash that would allow the separate airflow down the bodysides to be less compromised as it made its way to the rear of the car, thereby creating a bigger pressure pull on the air flowing through the diffuser and thus further helping an underbody flow already boosted by the high rake of the floor.

The 2019 limitations of the aero tricks at the front of the car hit Red Bull – as the team working the front end the hardest to make their whole aero philosophy work – particularly hard. From being right on the pace at the end of 2018, they were over 1s off the pace at the beginning of ’19. It took until almost mid-season before they were back in competitive shape, helped also by Honda allowing their engine to be run more aggressively.

With an unchanged set of aero regulations for 2020, Red Bull look to be starting the season more or less how they left off at the end of ’19. Even more than Ferrari, the RB16 looks heavily based on last year’s machine, with some obvious tweaking such as the different, more slotted nose opening. The heavily loaded outboard wing remains, as expected, and in that sense it remains quite different in aero concept to the Ferrari.

The car will post its first competitive lap times on February 19, when pre-season testing for 2020 begins at the Circuit de Barcelona-Catalunya.