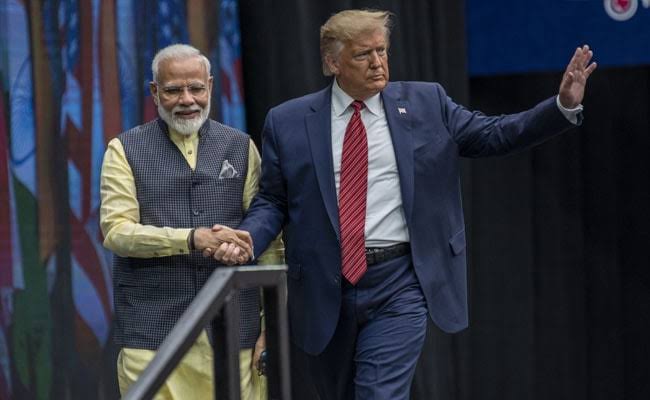 The Pragmatism is leading the current International relations. There are no permanent enemies or permanent friends, but permanent interests matters. If we go back seven decades back Indo-US relations weren’t so great because of India’s NON-ALIGNMENT Policy followed by the then Third world Nations which also included India. But today the same Nation which distanced itself from the US has made some fabulous arrangements to treat the host MR. DONALD TRUMP, President of the United States of America.

Today Mr.Trump paid his first-ever visit to India with his family and delegation of the US. The Prime Minister of India Narendra Modi himself welcomed the president Trump by his Iconic Handshakes and Hugs. From Ahmedabad Airport the powerful global leaders reached Sabarmati Ashram with a huge crowd accompanied them. President and the First lady tried their hands on Charkha at Sabarmati Ashram. While leaving Mr.Trump had some good words in Visitors book thanking Prime Minister Modi.

A few months back a giant program was held by Indo-American diaspora of US in Houston ‘Howdy Modi’ which drew attention all over the world. A similar show was organised to show hospitality towards US President Trump naming it ‘Namasthe Trump’ in the World’s largest Cricket Stadium at Motera.

The program was attended by a huge crowd of One lakh People.

Modi made a welcome speech:
India- USA friendship Long live, Modi many times stressed the word “DIVERSITY” in his speech. Speaking on the relations between India and the USA Mr.Modi said ” India-US” relations are no longer another partnership, it is a far greater and closer relationship”.

Further, Modi added that Under the leadership of Mr.Trump the relations between Indo-USA has reached new heights. He wished that both nations will further progress and prosper.

Trump expressed his gratitude towards Prime Minister Modi and People of India. He addressed Modi as ” MY TRUE FRIEND PRIME MINISTER MODI” and had to say many kind words to Modi.

Trump in his speech said :
AMERICA LOVES INDIA
AMERICA RESPECTS INDIA AND
AMERICA IS FAITHFUL TO INDIA
Mr.Trump has all the praises for his true friend Modi saying that Modi is very tough.
Mr.Trump said “INDIA GIVES HOPE TO HUMANITY”, Your Nation is doing very well. Adding more weight to his statement he said 12 people moved out of poverty every minute in India and expressed his confidence that within 10 years Poverty will disappear from the Nation.

Trump in his speech, however, gave space to remind Gandhi and his contribution to Salt March. But there has been a change in tone from speaking about Gandhi and later talking about Security challenges and Military strategies. He emphasised that India and the US maintain some good Military by citing an example of “Tiger Triumph” a joint exercise conducted by India and the US.

He expressed his commitment to defend the Indo-Pacific region, combat Radical Islamic Terrorism and secures the borders of both the nations to safeguard the SOVEREIGNTY.
He also hailed the Indian diversity and Unity. calling Mr.Modi as tough negotiator he stressed more on the principle of “LAISSEZ DE FARE”
The Space innovations of India in which he cited the brilliance of Chandrayan.

Voters in the US most of the times favoured Liberal Democrats than Conservative Republicans. Many Psephologists opine that Trump visit to India will certainly change the things in US political spheres. It is rumoured that Indian Diaspora will massively vote out in favour of Republicans which can make their victory a cakewalk.

In India, the Opposition leaders criticised the government for the infamous Wall built in Ahmedabad and also raised issues related to H1B1 visa.

Amidst the ongoing political tensions in New Delhi Mr.Trump will discuss various issues like Commerce, Security, Defense cooperation with Narendra Modi on Tuesday.

In a nutshell, this meeting between the world leaders shall happen in a most positive atmosphere that further boosts the confidence in Bilateral talks which has great potential that can have implications on global policies.