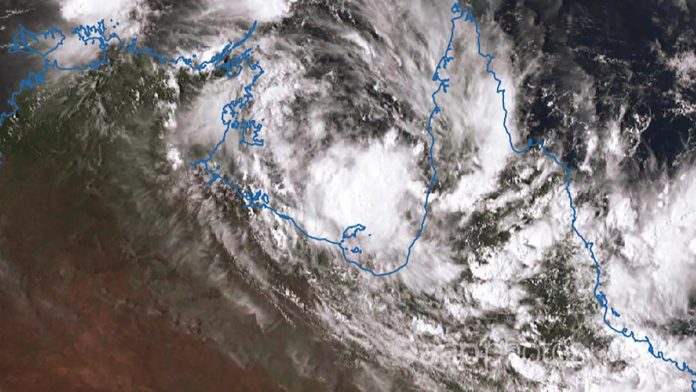 Tropical Cyclone Esther has made landfall near the Queensland-Northern Territory border.

The category one system hit between Mornington Island in the Gulf of Carpentaria, and the border after midday on Monday.

The slow-moving system is forecast to head west into the Northern Territory and become a rain-depression, says the Bureau of Meteorology’s Livio Regano.

Gale force winds are affecting areas along the coastline of the Gulf of Carpentaria.

These winds are expected to affect Port McArthur in the Northern Territory to Karumba and Normanton on the Queensland side of the border.

Residents in areas which are expected to suffer from gale force winds are being urged by the bureau to stay indoors.

Fears that the system could intensify into a category two system when it makes landfall were eased on Monday morning.

“The threat for widespread and prolonged heavy rainfall has eased, however brief bursts of heavy rain remain possible with thunderstorms,” the bureau said.

Abnormally high tides are expected to develop about the south-western Gulf of Carpentaria coast over the next couple of days and could produce minor flooding in low-lying coastal areas.

The slow-moving system is expected to weaken as it moves toward the central Northern Territory before possibly affecting Western Australia later in the week.