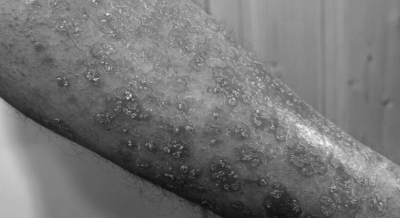 (IANSlife) Imagine being embarrassed by the idea of having to shake someone else”s hand, or constantly worrying about whether people are listening to you or simply staring at the rash on your skin- this is a reality for many patients with psoriasis.

“Psoriasis is a chronic skin condition in which patients develop red, itchy patches because of an overactive immune system. These lesions are often the cause of embarrassment and distress for many sufferers,” Dr. Sanjiv Kandhari, Consultant Dermatologist, New Delhi said.

In a healthy person, the skin cells grow, mature and die in three to four weeks and are then replaced by new skin cells. However, this process takes just two weeks in an individual suffering from psoriasis, and instead of falling off, the skin cells pile up to form painful, itchy patches or lesions. Being diagnosed with psoriasis also puts patients at a higher risk of other medical conditions such as diabetes, hypertension, diabetes and cardiovascular diseases.

Unfortunately, patients with severe psoriasis are at an increased risk of morbidity and mortality. The symptoms of psoriasis vary from person to person. Common symptoms include inflamed skin patches; dry and cracked skin that bleeds; soreness; and plaques or scales. Most cases of psoriasis go through cycles, flaring for some time and then subsiding for a period. While flare-ups cannot be predicted, we know that they are often triggered by factors such as mental stress, smoking, excessive alcohol consumption, a skin injury or skin infection, vitamin D deficiency, and certain medications.

How psoriasis can affect men, women and children

Psoriasis usually affects men and women in their 20s or 30s. In India, men are at a higher risk of this condition and studies suggest that men suffer from more severe symptoms. Children only develop psoriasis if it is prevalent in their families – increasing their chances significantly if both parents have it. In children, the psoriasis plaques are usually softer, thinner and not as scaly as compared to those in adults. Children experience more itching and often have patches on their face.

Stigma and ”side-effects” of psoriasis

Unfortunately, the public is largely unaware of psoriasis and believe common misconceptions such as “psoriasis is contagious”. Moreover, the appearance of the rash on exposed areas of a patient”s skin can make people uncomfortable. All of this may lead to the social isolation of patients. While experts are not yet sure of the exact cause(s) of psoriasis, they know for certain that psoriasis is not contagious, and it cannot be contracted from being in close proximity with a patient.

“I have often observed that young women and men with psoriasis worry about whether they will find a partner willing to marry them. Intimacy is also a concern for patients, because about 60 per cent of those with plaque psoriasis – the most common type of psoriasis – have patches in their genital areas,” the doctor, who is associated with mfine, an India-based virtual hospital on the cloud, said.

Women are often concerned about whether this diagnosis will prevent them from starting a family or breastfeeding their child. School children fear being bullied or made fun of because of their skin condition.

These fears are understandable, which is why patients must speak to their doctors to ensure that their condition is treated promptly and managed. There are a number of therapy options available for patients of all ages. Women living with psoriasis can even plan to have children, as long as their symptoms are brought under control. They should speak to their doctors so that their medication is changed, or its dosage altered, as required.

Psoriasis is a chronic condition that needs lifelong support and management. It is vital for patients to take their medication as prescribed and be regular with their medical check-ups, in order to live a productive and fulfilling life — despite psoriasis.