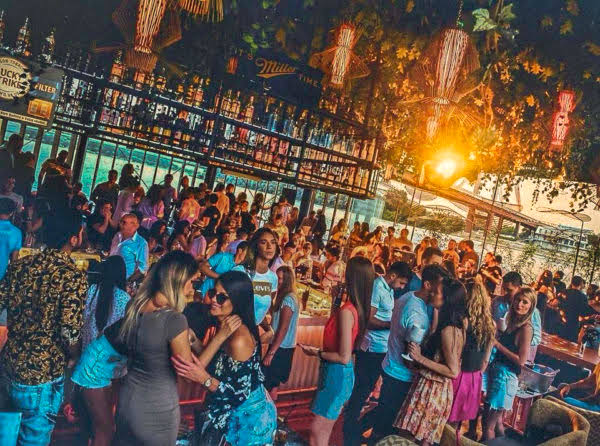 Aside from its political history over the past two decades, or maybe thanks to it, Belgrade is a city that lives for the moment with its thriving nightlife scene. Back in the nineties, Belgraders held outdoor concerts while undergoing NATO alliance bombardment, an accomplishment that abashed many outsiders. Two decades of bad press, political sanctions and total isolation that kept Serbia and its energetic capital off the map have now passed, and Belgrade has opened its doors to the whole world. Now, foreigners are finally realising what locals always knew – that Belgrade is the capital of European nightlife.

Belgrade residents will tell you that the nightlife is one of the few great things in the city. I think it’s one of the many, but truly the experience is a unique one. Along the banks of the Danube and Sava rivers, one after another in a chain of music – so-called splavovi – floating raft clubs – snake into the inky Balkan night. Loaded with hundreds of smiling people, crowds of night owls line up to partake variously of Gypsy bands, electronic mixes, rock ‘n’ roll and a distinctly Serbian hybrid known as Turbofolk. Socialising tends to go on to the early hours so there’s an energy about the city no matter what the time of day or night.

With the rise of two the most famous Serbian music festivals – Exit, for which you have probably heard because it is the best European rock and techno music festival and Guca, where hundreds of Gypsy brass bands entertain over 600,000 visitors – Belgrade is now on the western European music fan’s radar.

If you plan to have fun in the best Belgrade clubs in grand style, and if you want the best tables in the heart of the party, simply go to search the web for one of many party promo teams in Belgrade that will take care of you and provide entrance to the clubs with no waiting in lines.

When it comes to choosing a club, it really does not matter here. In Belgrade there are hundreds, and all provide really good entertainment. Here I will point out a few: Belgrade has dozens of techno clubs – I recommend Sound which is located on the Sava river, under the Old Sava Bridge and Plastic in the old part of town near the Botanical Gardens – while long-established rock club Akademija still pumps out the power chords. To see Serbia’s elite at play, go to Mr Stefan Brown on the ninth floor of a glass tower, between the Slavija square and the railway station. Here excellent cocktails are served and Belgrade’s beautiful people dance on tables as the city’s lights shimmer in the distance. If you like the sound of Gypsy you can’t miss the area called Ada Ciganlija (Gypsy Island) were boats recreate the atmosphere of a kafana (Serbian taverns): working-class bars where Gypsy musicians entertain at tables. The most notorious is Black Panthers. Also it is necessary to allocate the city’s old bohemian quarter called Skadarlija where you will be able to try a number of Serbian cuisine specialties and to enjoy the tamburašI – a kind of folk music.

Entry to clubs is often free, and drink prices vary but are always reasonable compared with those of the western Europe, while smoking remains legal and popular. Best of all, people are very friendly, and the city is really safe and there is not much crime.

Not bad to mention that the taxi here is really easy to catch and is very cheap compared to Paris or London, and almost every taxi driver knows clubbing city map as his pocket.

Belgrade’s Nikola Tesla international airport offers direct flights from most European capitals, and a large number of hotels offering transfer at a reasonable price. There are a lot of hotels in Belgrade, and cheap hostels as well. I would especially like to mention hotel Bali Paradizo, located relatively close to the airport. It is really amazing. Accommodation here is at reasonable prices, and the hotel even has 3 outdoor and indoor swimming pools and a beautiful spa. For the hotel guests they will arrange transportation in luxurious cars to any club or bar in town for only 8 euros.