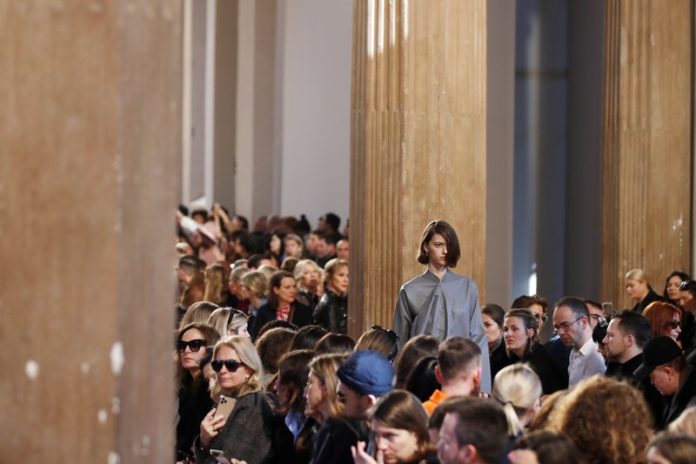 Runway shows continued apace on the fourth day of Milan Fashion Week as the itinerant fashion crowd took an analytical attitude toward the cases of the virus from China clustered not far away in northern Italy.

Milan city officials closed offices as a precaution as the number of confirmed coronavirus cases grew in an area just an hour outside of the fashion capital. Milan is the capital of Italy’s Lombardy region, which reported 39 confirmed cases tied to a single patient.

While there was chatter at runway shows and other Fashion Week events about the rapidly spiking infections, health worries remained remote enough.

“For the moment the situation is under control,” the president of the Italian National Fashion Chamber, Carlo Capasa, said.

’’It doesn’t seem to me, in this moment, for what regards our sector, our fashion week, that there are signs of danger,” Capasa said. ‘’We are tranquil and prudent.’’

Still, MIDO, the world’s largest eyewear industry fair, announced Saturday that it would postpone the gathering scheduled Feb. 29-March 2 until June, due to concerns over the virus.

’’The evolution of this health crisis under way in our country does not leave any doubt over our decision,″ MIDO president Giovanni Vitaloni said in a statement.

While the virus clusters didn’t cause undue health concerns at Milan Fashion Week, fashion houses remain worried about the longer-term economic impact. Chinese consumers at home and abroad are responsible for one-third of global luxury sales. The Italian fashion chamber has already forecast a 2% contraction in first-half revenues.

’’I think we have to live day by day because it is beyond our control,” Ferruccio Ferragamo, son of the late Salvatore Ferragamo, said at the brand’s Saturday’s runway preview. ‘’We try to do our best with heart and head, everything in order to get over this.’’

He said the brand is maintaining close contact with its people in China.

‘’I think that if we are very ‘foot on the ground,’ we will benefit later,” Ferragamo said.

Giorgio Armani also expressed longer-term uncertainty ’’We don’t know when we will be able to breath a sigh of relief,” the designer said.

Armani said the challenge for businesses won’t end when the virus stops spreading. At that point, a fashion companies will need to renovate stores and ’’again create enthusiasm among the people,″ he said after the Emporio Armani preview Friday.

The queen, the mother, the lover, the sage, the maiden, the huntress and the mystic. They are the seven Jungian archetypes that inspired creative director Paul Andrew’s newest collection for Salvatore Ferragamo.

’’I was thinking that here, today, in this modern age, a woman in any given hour is all of those things together,” Andrew said backstage.

Andrew’s mood board was full of ’’iconic” women who fulfill those roles. They included Nancy Pelosi, Michelle Obama, Oprah Winfrey, Sharon Stone, in her ‘’Fatal Attraction,’’ iteration, and Wanda Ferragamo, Salvatore’s widow, who helped turn his luxury shoe business into the global luxury brand it is today.

The collection brimmed with Italian craftsmanship — from wavy woven bags made from upcycled left-over leather from the Ferragamo warehouses, to hand-made macramé inserts in an archival botanical print that enhanced the back of a print blouse with eye-catching detail.

Trousers were high-waisted, sometimes corseted and other times layered with a built-in side-cinched long skirt on top. Knitwear, worn perhaps as mini-dresses, came embroidered with exotic florals. Leather coats had a light feel and incorporated scarves. The design feature was repeated on sheer dresses and blazers, creating a dramatic effect. And there were strong all-leather pant looks for anyone wanting to star in their own James Bond thriller.

The opening and closing looks featured fringe-adorned dresses — one a shimmering silver fringe skirt over a black sheath, and the other long strands of ribbon trailing from a black strapless number — that had a polished, shredded effect. Coincidence that it comes just weeks after U.S. House Speaker Nancy Pelosi shredded a copy of U.S. President Trump’s State of the Union address on live TV?

’’She’s an incredible woman,” Andrew said of Pelosi. ‘’She is powerful, she is strong, she is comfortable with herself. She is everything I admire in a woman.’’

As the only Chinese brand originally on the Milan schedule that was able to keep its runway appointment, Yang was ’’very emotional about the show,″ said an associate, who goes by Meng. ’’She’s worried about public opinion.″

The show was packed, including Capasa in the front row, and her return to making an upbeat and fun collection after a more commercial last season was popular with the fashion crowd.

That included a multi-tiered bubble ruffle dress, an overcoat with accentuated sleeves and a bubble skirt finish, and a mini-dress with puffy circular shoulders contrasting with the tightly cinched waist — all in bright hues of pink or orange. For him, there was an oversize tan plaid suit jacket that looked as if it had been mauled, revealing purple undertones.

Yang makes all of her accessories and part of her ready-to-wear collection in Italy, and the other half in Shenzhen, China. The collection was mostly complete before the Chinese New Year and in Milan before flights closed. Three other Chinese brands had to pull out of Milan Fashion Week due to travel issues related to the virus.

Annakiki’s Chinese factory was able to open last week after a three-week closure, Meng said. But business still faces a tough recovery in China, where traffic at 24 monobrand stores has been ’’down to zero,″ she said.

The brand is also available in eight cities outside Asia, including London, Paris and Florence as well as online.

For her, there were light-weight knit tunics with diagonal stripes, worn with dark horizontally striped leggings. Overcoats were oversized and enveloping. Layered cardigans were worn with loose knit pants tucked into boots.

Looks were finished with glittery knit gardening gloves, kerchiefs around the neck or Renaissance painter hats.

The uniting theme was geometry: stripes of all types, that is horizontal, diagonal, vertical, triangular and patchwork.

For him, geometric patterns clashed on a clean silhouette: a knit top of tiny bursts, patchwork pants and houndstooth overcoat covered with triangle patches.

Sisters Gigi and Bella Hadid closed the Missoni show, side-by-side, fittingly for the brand that is still firmly in family hands.

Lace and embroidery lent beauty to Ermanno Scervino’s ever-light creations for next fall and winter.

Strong floral embroidery, white on black, gave a Nordic edge to belted overcoats and ponchos, and a couture touch to puffer coats. Sequins became a glam daytime office look on a green asymmetrical skirt paired with a knit turtleneck. Pretty transparent pleated skirts were worn over sequined layers for a pretty impact. Slip dresses ranged from leather and lace combos in black to white-on-white embroidery. Beautiful golden lame suits will light up any holiday party next season.