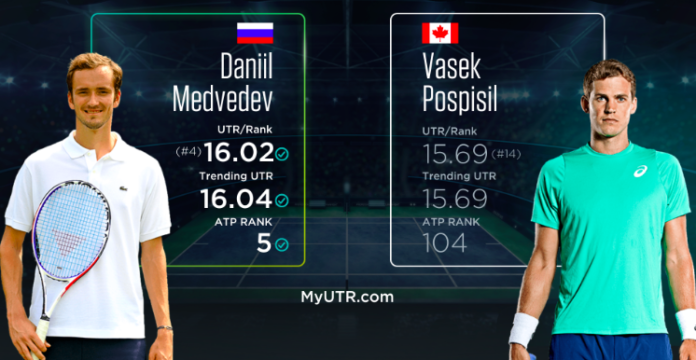 Fresh off his first ATP final appearance since the 2014 Citi Open, world No. 104 Vasek Pospisil is poised to skyrocket up the rankings.

The 29-year-old was ranked as high as No. 25 in 2014, but struggled mightily with a back injury for most of the last three years. Initially he tried to avoid surgery, but it proved to be the only option. Over a year removed from his herniated disk operation, Pospisil is finally healthy again, and playing world-class tennis. Since October, Pospisil has beaten Diego Schwartzman, Karen Khachanov, Reilly Opelka, Fabio Fognini, Denis Shapovalov and David Goffin. It’s safe to say he’s back.

Pospisil’s opponent, Daniil Medvedev, is hoping to maintain last season’s 59-match win momentum. Medvedev is ranked nearly 100 spots higher, but according to their trending UTR, they aren’t separated by much.

Medvedev struggled with Pospisil in Shanghai last October. Although he squeaked by in straight sets, 7-6 (7), 7-5, he smashed a racquet during the match, and was visibly frustrated by Pospisil’s unrelenting pace and aggression.

Medvedev loves inviting opponents into net, but few players cover the net and volley as crisply as Pospisil. It’d be in the Russian’s best interest to maintain some level of point control. Medvedev defends as well as anyone, but you aren’t beating Pospisil purely with defense.

If Medvedev lets Pospisil dictate the points, especially indoors, this match could get interesting. Pospisil should be slightly fatigued from his final run in Montpelier, but that’s nothing a little maple syrup can’t fix. In the end, expect Medvedev to advance in a three-set battle.