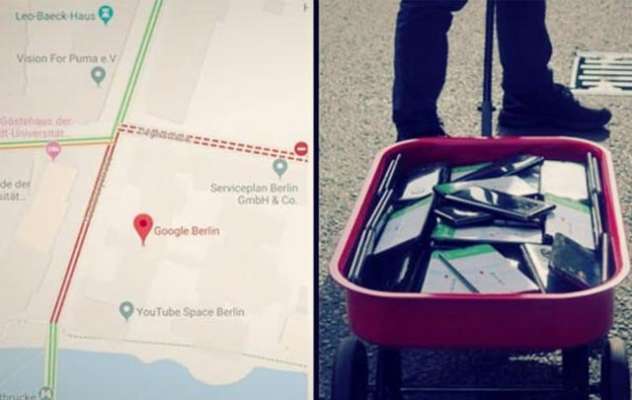 (IANS) Call it bizarre but a German artist Simon Weckert has posted a video on YouTube, showing how he “hacked” Google Maps with 99 smartphones and a wagon to create “virtual traffic jams” on the streets of Berlin.

Weckert put 99 smartphones with Google Maps on into a small wagon cart and then wheeled that cart around various streets in Berlin, including outside the Google office, Android Authority reported on Monday.

The smartphones “apparently fooled Google Maps” into thinking that there was a high concentration of users on those streets.

Because the second-hand phones were in a cart, Maps was further tricked into believing that the traffic was slow-moving.

As a result, the navigation app started showing virtual traffic jams by turning green streets to red in the online navigational tool, showcasing how digital technology can have a real impact on the real world.

Basically, Google Maps” servers interpreted the situation as traffic congestion, and began showing this to others on the street.

This, in turn, prompted drivers to turn away and avoid streets where there was actually no traffic.

Google was yet to officially comment on Weckert”s experiment.

“I work for Google Maps and I know quite a bit about how this works. I believe this is possible,” tweeted a senior software engineer for Google Maps.

With its geo tools, Google has created a platform that allows users and businesses to interact with maps in a novel way, well, unless Weckert aims to play around it.