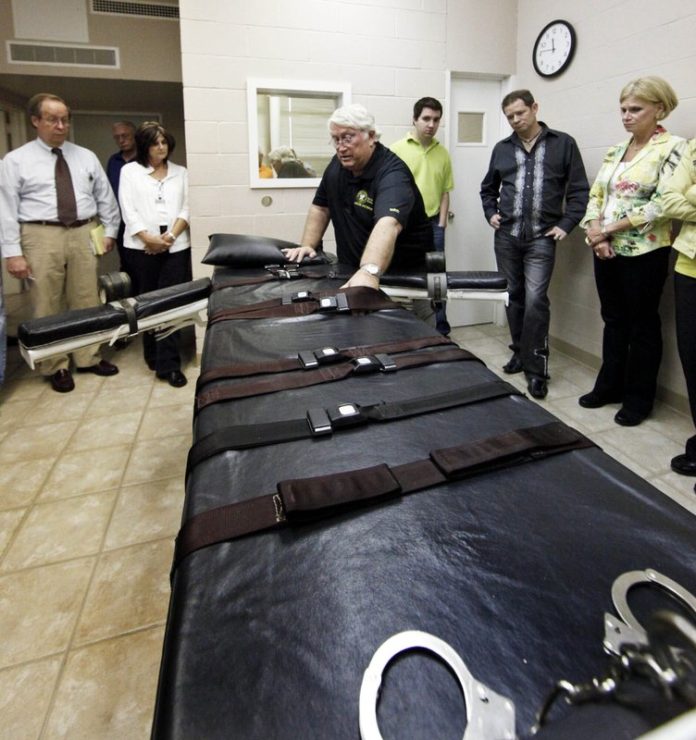 Louisiana cleans its execution chamber at the state penitentiary daily, but it’s been more than a decade since a condemned prisoner has laid on the chamber’s black-padded gurney to die.

Sixty-eight people sit on Louisiana’s death row, with no execution dates set. Though the state historically has been tough on crime and holds the dubious distinction as the nation’s incarceration capital, Louisiana seems to be doing very little to carry out its death penalty.

In January, Louisiana reached the 10-year mark since its last execution, joining a trend of falling execution numbers across the country. Death chambers in 12 of 29 states with legalized capital punishment have gone unused for more than a decade, said Robert Dunham, executive director of the Washington-based Death Penalty Information Center. Utah will join that list in June.

Louisiana’s execution protocols are tied up in litigation, and corrections officials say they can’t obtain lethal injection drugs amid pushback from pharmaceutical manufacturers. Not surprisingly, people on opposite ends of the capital punishment debate disagree about the driving forces behind the drop in executions.

Death penalty opponents say rising concerns from the public and prosecutors about the cost of such cases, racial disparities in death sentences and high-profile exonerations have lessened support for capital punishment.

“Over the last 10 years, we believe Louisiana has seen a massive decline in its appetite for the death penalty,” said Mercedes Montagnes, executive director of the New Orleans-based Promise of Justice Initiative, which advocates for ending capital punishment.

But a 2018 survey by Louisiana State University found a majority of Louisiana residents favor the death penalty. Critics of the stalled executions instead describe prosecutors frustrated by lengthy legal battles that surround a successful death sentence, and blame a lack of will from state leaders.

“The reason it’s not being enforced is political. If there was a strong interest in getting the law enforced for the worst murderers in Louisiana, you’d have the drugs or you’d have alternative drugs,” said Michael Rushford, president of the California-based Criminal Justice Legal Foundation, which supports capital punishment.

Louisiana Gov. John Bel Edwards, a Democrat recently reelected to a second term, refuses to disclose his personal opinion about the death penalty.

But he insists the issue is out of his hands, both because of a 2012 lawsuit challenging the state’s lethal injection protocol and procedures and because companies don’t want their products associated with capital punishment.

“There is a federal court stay on executions in Louisiana, and we also have an inability to acquire the drugs to use in lethal injections,” Edwards said during his reelection campaign. “No manufacturer will sell them to us for that purpose — and in fact they have threatened suit against Louisiana if we use them for executions.”

Still, some states — led by Texas and others mainly in the South — are moving ahead with executions.

Twenty-two condemned inmates were executed last year, according to the Death Penalty Information Center. On Wednesday, Georgia executed Donnie Cleveland Lance, convicted of beating to death his ex-wife and shooting to death her boyfriend. Meanwhile, the Trump administration is trying to restart federal executions after a 16-year break.

Since the Supreme Court reinstated the death penalty in 1976, Louisiana’s held 28 executions. The last lethal injection came in January 2010, when the state executed Gerald Bordelon, a convicted sex offender who confessed to strangling his 12-year-old stepdaughter and waived his appeal. Before Bordelon, the state’s most recent execution had been in 2002.

Vigils in New Orleans and Baton Rouge marked the 10-year interval since Bordelon’s execution. At the Louisiana Capitol, the Rev. Alexis Anderson urged those assembled “to keep fighting, to keep believing in the basic humanity of every person in the criminal justice system.”

Louisiana lawmakers have repeatedly rejected efforts to end the state’s use of capital punishment, even as the unofficial moratorium on executions has stretched over years.

The issue has become a political football, with Republican Attorney General Jeff Landry saying Edwards doesn’t appear interested in finding ways to carry out his state’s death sentences. Rushford agrees, saying leaders of states such as Texas have actively worked to track down lethal injection drugs, buying them in Asia, negotiating with other states or using compounding pharmacies.

Landry backed legislation last year to shield the identity of execution drug suppliers, saying other states that carry out executions have similar laws. For example, Georgia, which executed three men in 2019 and another last week, shields the identity of the compounding pharmacy it uses to obtain pentobarbital.

But Louisiana’s secrecy legislation stalled, with opponents saying it risked the state buying lethal injection drugs on the black market or in other inappropriate ways.

Wayne Guzzardo urged lawmakers to enact the bill, describing the murder of his 27-year-old daughter Stephanie during a 1995 restaurant robbery and the wait for her convicted killer’s execution: “All we’re asking for is justice. This has gone on long enough.”

Twenty-two inmates previously sentenced to death have had those sentences reduced or have been exonerated since 2010, according to the corrections department, and four people awaiting executions have died from natural causes.