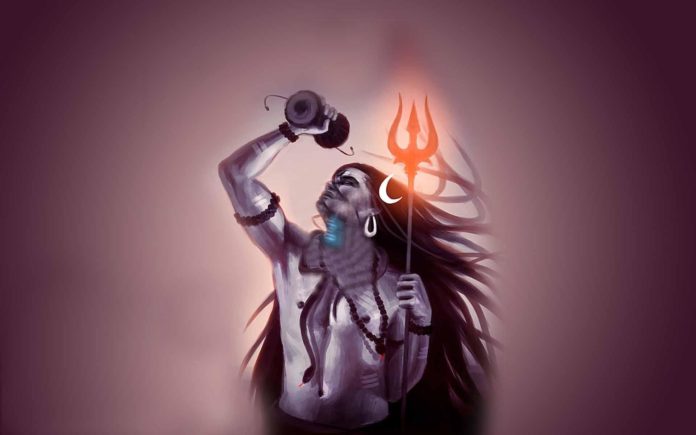 Mahadeva is a Sanskrit word where ‘Maha’ roughly translates to supreme or greatest and ‘Deva’ translates to God. Mahadeva is the ‘Destroyer’ in the Trimurti. Trimurti is the trinity of three supreme Gods which include Lord Vishnu and Lord Brahma along with Mahadeva, who is also popularly known as Lord Shiva. Even though he is known as the ‘Destroyer’ he is also often said to be the one who creates, protects and transforms the universe. Also, there are around one thousand names for Mahadeva, each of which is mentioned in the ‘Shiva Sahasranama Stotram’.

The story of the origin of Mahadeva is slightly confusing because there are different stories and different opinions about it.

Some people believe Mahadeva to be ‘Swayambhu’ which means self-manifesting. No one created Mahadeva but Mahadeva himself, due to which he is often considered formless, limitless and infinite which also translates to the primal soul of the universe from which everything and everyone else is derived.

Certain Hindu scriptures hint to the origin of Mahadeva to be from an argument which took place between Lord Vishnu and Lord Brahma about who is the greatest God amongst them. During this argument, a seemingly infinite pillar arose between the two mighty Gods who then started to look for the root and the tip of this pillar. After ages of failed searching, both the Gods returned to the original place of the argument only to witness the presence of the Mahadeva after which both of them were humbled by Mahadeva’s infinite power.

Six most life-impacting things that I learned from Mahadeva

Mahadeva is also called ‘Trilochana’ because of the existence of a third eye located in the center of his forehead. The third eye is believed to be the Lord’s strongest weapon of destruction but I choose to look at it from a different perspective. The third eye, to me, is the ‘Eye of Wisdom’ since through understanding only we can truly witness our negative traits and no one but we can destroy the evil within us to let peace and love flourish within us, and hence understanding the third eye can help us see ourselves more clearly and live a happier and a more satisfying life.

2) Snake around the neck

When the cosmic oceans were churned by Gods and demons to obtain ‘Amrit’ i.e. the nectar of immortal life, a snake named Vasuki was used by the Gods as their churning string after which the entire universe got enveloped by poison and that’s when Mahadeva drank this poison to save the universe and after that Amrit was finally obtained. It is believed that some snakes along Vasuki also drank this poison. So, Shiva wore Vasuki on his neck from that day onwards as a blessing. I look at this snake as a symbol of our ego which is nothing but an ornament to our true nature. We define our ego and not otherwise and because of this we can obtain a very unique way of looking at life.

Mahadeva is always carrying a trident in his right hand. This trident is called ‘Trishula’ which means the destroyer of all kinds of suffering. I believe that the suffering of past, present, and future are being signified using this trident. The trident collectively being just one simply tells us that all that really exists is the present moment. So always living in the present moment can protect us from the constant regrets of the past and constant fear of the uncertain future. Living in the present moment needs to be practiced just like any weapon or instrument and if we master this weapon we can destroy a majority, if not all of our sufferings.

Tandav is primarily of two types, where the first one is ‘Ananda Tandava’ which was performed by Mahadeva in a happy mood; the other one is ‘Rudra Tandava’ which was performed in an angry mood. This signifies the effective usage of emotions. We, as humans, tend to flow with our emotions which often lead us to a place where we didn’t want to end up. Understanding how to channelize our emotions effectively can let us live a more peaceful and productive life while also leading to harm reduction caused due to our inability to deal with our emotions effectively.

Mahadeva is known as ‘Adiyogi’ which translates to the first yogi. The Yogic culture believes Mahadeva to be the originator of Yoga, instead of a God. It is believed in this culture that Mahadeva achieved enlightenment on the top of the Himalayas and he was the first human to achieve enlightenment. Seven people noticed the vibrant energy being radiated by this still and meditative figure. These seven people were later known as ‘The Sapt Rishis’. They learned methods of meditation and methods to achieve enlightenment from Mahadeva. From this, I realised that meditation plays a very important role in one’s life. It helps us to channelize our energy and achieve a state of thoughtlessness which can lead to increased focus and productivity in our day-to-day lives. Also, through meditation one can start walking on the path of enlightenment and spiritual knowledge.