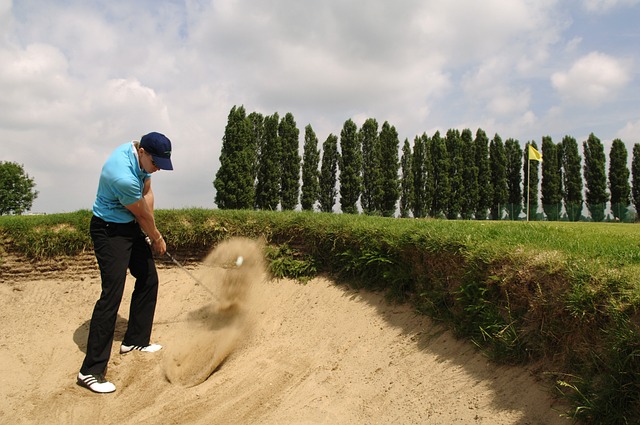 Sand bunkers (formerly called “sandtraps”) are strategically placed on courses in the landing areas where the majority of players hit their tee shots and around the greens. The frequency of your use of sand shots depends on the course or courses you play. The number of sand bunkers on a given course can range from none to 100 or more.

Your ability to consistently hit out of bunkers helps you develop confidence and save strokes during a round of golf. For many players, the sight of sand causes a panic button to go off. This doesn’t need to happen to you.

When your ball lands in a sand bunker, the generally soft texture of the sand creates a hitting surface and ball lie that are different from those found on the fairway or with the grass conditions on which you have thus far practiced. The sand also adds the challenges of your maintaining your balance during the swing and adapting to the rules that prohibit you from letting your club touch the sand before your forward swing.

Your understanding of the modifications needed in the setup position and the use of the sand wedge to allow for the different sand textures can help you become an overall better golfer.

How to Execute the Sand Shots

The sand wedge is the club specifically designed for use in the sand but is also used for other shots. This club differs from other irons in that it is slightly heavier and the sole, or bottom, of the club is wider and angles down with the back edge lower than the front edge of the club. The differences in club design make it easier to swing through the sand. The texture of the sand, though soft, is heavier than grass and offers greater resistance when contacted during the swing.

There are two basic sand shots: The explosion shot and the buried lie shot; the lie of the ball in the sand determines which one is selected. When the ball rests on top of the sand, more similar to a ball in the fairway, the explosion shot is used. The buried lie shot is used, as the name implies, when the ball is partially buried or rests completely below the level of the sand. Each shot will be discussed separately, with special note of the specific modifications in the setup positions from that of the full swing.