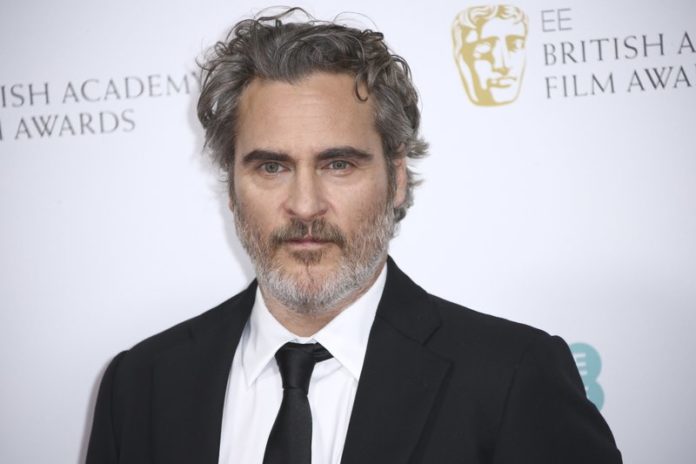 The superhero villain saga “Joker” leads the race for Sunday’s British Academy Film Awards, a glitzy event that has been overshadowed by criticism of the nominees’ lack of diversity.

Todd Phillips’ audience-dividing movie, which charts the transformation of a frustrated stand-up comedian into Batman’s grinning nemesis, is nominated for 11 awards at Britain’s equivalent of the Oscars, including best film, best director and best actor for Joaquin Phoenix.

Director Martin Scorsese’s mob epic “The Irishman” and Quentin Tarantino’s homage to 1960s’ Los Angeles, “Once Upon a Time … in Hollywood,” have 10 nominations apiece at the awards, also known as the BAFTAs.

No women have been nominated as best director at the BAFTAs for the seventh year running, and all 20 nominees in the lead and supporting performer categories are white.

Awards organizers have said it is “disappointing” that there are no performers of color among the acting nominees, who are chosen by 6,500 academy members who work in the U.K. and international film industry.

British star Cynthia Erivo, who is Oscar-nominated for her performance as abolitionist Harriet Tubman in “Harriet” but was snubbed by Britain’s Academy, declined an invitation to perform at Sunday’s award ceremony in protest.

Marc Samuelson, chairman of the British Academy’s film committee, said after the nominees were announced last month that the lack of diversity was “infuriating.”

“We can’t make the industry do something. All we can do is encourage and push and inspire and try to help people coming in,” he said.

Organizers are trying to make the awards ceremony carbon neutral for the first time, with a red carpet made from recycled fibers and a post-awards dinner featuring sustainably sourced food. Instead of the goody bags of past years, guests will receive a “gifting wallet” made from recycled plastic and containing vouchers.

Stars walking the red carpet outside London’s Royal Albert Hall — set to include Brad Pitt, Al Pacino, Margot Robbie and Charlize Theron — have been encouraged to make “sustainable” fashion choices, wearing an outfit they already own or renting one for the occasion.

Prince William — the British Academy’s president — and his wife Kate, the Duchess of Cambridge, will be the guests of honor at Sunday’s ceremony. William is due to present a BAFTA Fellowship, the academy’s top honor, to Lucasfilm boss Kathleen Kennedy.

Victory at the BAFTAs is often a good predictor who will win prizes at Hollywood’s Academy Awards, being held on Feb. 9.

Best-film BAFTA contenders are “Joker,” “The Irishman,” “Once Upon a Time … in Hollywood,” the World War I thriller “1917” and the Korean drama “Parasite.” The directing nominees are Phillips, Scorsese, Tarantino, Sam Mendes for “1917” and Bong Joon-ho for “Parasite.”

Nominees for best British film — a separate category — are “1917,” the Elton John biopic “Rocketman,” the pontifical portrait “The Two Popes,” the Ken Loach gig-economy drama “Sorry We Missed You” and the Syria documentary “For Sama.”

The best-actor contest pits Phoenix, who has already won Golden Globe and Screen Actors Guild awards, against Leonardo DiCaprio for “Once Upon a Time … in Hollywood,” Adam Driver for the divorce drama “Marriage Story,” Taron Egerton for “Rocketman” and Jonathan Pryce for “The Two Popes.”

Renee Zellweger is favored to win the best-actress trophy for her performance as Judy Garland in “Judy.” She’s up against Jessie Buckley for the Scotland-set country-music drama “Wild Rose,” Scarlett Johansson for “Marriage Story,” Saoirse Ronan for classic-novel adaptation “Little Women” and Charlize Theron for the Fox News scandal story “Bombshell.”