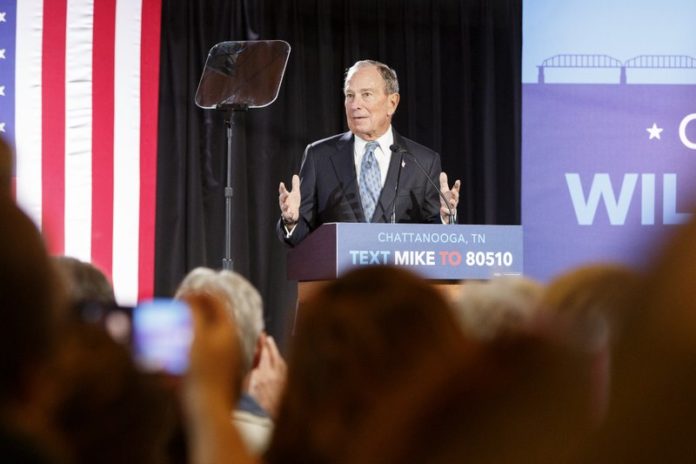 Michael Bloomberg on Wednesday sought to move past newly resurfaced years-old comments in which he defended the controversial “stop-and-frisk” policing tactic that has been found to disproportionately affect minorities.

The billionaire former New York City mayor, who is now seeking the Democratic presidential nomination, launched a two-day tour of the South intended to build relationships with African Americans, who are a crucial voting bloc for the party. During a stop in Chattanooga, he told reporters: “We’re going to do very well in the African American community.”

“They need a good economy, they need better schools, they need more health care, they need jobs and those are the kinds of things that I can bring to the table,” he said.

His trip began the same day that a trio of endorsements was announced from members of the Congressional Black Caucus, including Georgia Rep. Lucy McBath, a prominent gun control activist.

Bloomberg is testing how voters will respond to his unconventional approach to clinching the Democratic nomination to take on President Donald Trump. While most candidates have focused on the traditional early voting states, Bloomberg has taken his campaign — and his sizable financial resources — into places like Tennessee that vote on Super Tuesday. And although the Democratic contest has barely begun, he’s campaigning with the air of a front-runner, announcing plans on Wednesday to open an office in New Hampshire to keep the state in the Democratic column this fall.

Democrats in the states that vote on March 3 said they’re awed by the breadth of Bloomberg’s operation and warned that it can’t be discounted.

“Not only has he spent an enormous amount of money to get on air — more than I’ve ever seen a Democrat spend in Texas, and not just on TV, but on Facebook, social media,” said Texas Democratic Chairman Gilberto Hinojosa, “but what he’s done is hired a big chunk of the Latino and African American leadership to work for him and bring communities of color together behind his campaign.”

The question facing Bloomberg is whether that strategy will work as the intensity of his campaign grows. The controversy over his 2015 “stop-and-frisk” remarks demonstrated that while Bloomberg has successfully generated attention for his campaign by skipping the early voting states, flooding the airwaves with ads and traveling to multiple states a day, he hasn’t faced the traditional scrutiny that comes with being a presidential candidate.

Bloomberg hasn’t participated in any of the debates so far, and as he gains traction, rival campaigns are devouring his past work and comments to seize on anything that could hobble him.

Progressive Democratic strategist Rebecca Katz noted that Bloomberg’s rivals will have a long record to sift through to try to highlight unflattering moments of his career.

“There’s so much content to be unearthed,” she said. “He was the mayor of New York City for 12 years. That’s a lot of talking.”

Indeed, the comments that resurfaced Tuesday came from a 2015 appearance Bloomberg made at the Aspen Institute. He advocated for putting “a lot of cops where the crime is, which means in minority neighborhoods.”

During that same event, Bloomberg weighed in on inequality in remarks that would seem strikingly out of place in today’s Democratic Party, declaring that he’d “love to get more billionaires coming to New York. Does that give you more inequality? Yes, it does.”

He also likened Russia’s invasion of Ukraine to the United States’ expansion through history, and while he’s backed marijuana legalization since launching his presidential bid, Bloomberg said in the Aspen Institute recording that legalization was “one of the stupider things that’s happened across our country.”

And that’s just one interview. During his time as mayor, Bloomberg also faced controversy after The Associated Press uncovered a widespread New York Police Department surveillance program targeting Muslims, a program he continued to defend after it became public. He’s been a longtime proponent of the expansion of charter schools and a fierce critic of teachers and other public service unions; oversaw an exponential rise in inequality in New York City; and has become known for enacting “nanny-state” policies aimed at regulating public health, like banning large, sugary sodas.

Bloomberg’s opponents seized on the 2015 stop-and-frisk comments as one of their first real opportunities to go after the businessman. Billionaire activist Tom Steyer, who is working to attract black voters in South Carolina ahead of that state’s Feb. 29 primary, called the comments “extremely disturbing” and said all the candidates should disavow such “racist stereotypes.” And Nina Turner, a national co-chair for Bernie Sanders’ campaign, said the comments reveal “the true nature” of Bloomberg and called on him to drop out because of them.

Bloomberg has apologized for his oversight of the stop-and-frisk program. But in Tennessee, he refused to directly apologize for the 2015 comments. In response to repeated questions, he said, “I don’t think those words reflect how I led the most diverse city in the nation.”

“I apologized for the practice and the pain that it caused,” he said Wednesday. “It was five years ago. And, you know, it’s just not the way that I think, and it doesn’t reflect what I do every day.”

There wasn’t an immediate sense that the 2015 remarks would hurt his campaign.

Introducing Bloomberg in Chattanooga, Dr. Elenora Woods, president of the city’s NAACP chapter, said he would be a tireless fighter for economic justice for black Americans.

“That’s not going to stop me from voting for him,” said Jenny Gaines, a 58-year-old who owns a tech company, adding that no candidate is perfect. “I know he has teamed up with former President Obama,” she added.

Bloomberg has started running a TV ad with Obama speaking favorably of him.

Tracy Arnold, a 61-year-old former police office, said he’s willing to cut Bloomberg a break on his past record because he believes that people can change their opinions as they learn more about the black experience.

“Perhaps at that time, (Bloomberg) thought stop and frisk would work, and he maybe had good intentions at the time, but like a lot of things, though, your victims end up being majority-minority,” Arnold said. “I need to know a little bit more of what that meant and what his plan was.”